My Day at Ninfa 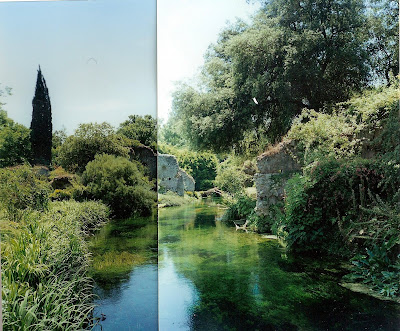 Gunnera manicata along the banks of the river

A grove of bananas at the edge of Campo della Gloria 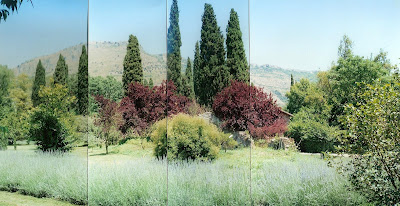 Cypresses add vertical punctuation with the Lepini Mountains beyond

In the summer of 2000, I visited Tuscany with my wife's family and I had the opportunity to tour several Italian gardens including the iconic Villa Gamberaia, Villa Massei, the garden of fellow blogger Paul Gervais, Venzano and the garden which has been called the most romantic in the world, Ninfa. Ninfa is a picturesque garden built on the ruins of a medieval town near Rome which was sacked in 1381 and later abandoned during a malarial epidemic. It was restored when the Pontine marshes surrounding the village were drained in the 1920's by Prince Gelasio Caetani, whose family has owned the land since 1298.
The plantings on the ruins were developed by a succession of gardeners in the family. Marguarite Chapin, an American, who married Roffredo Caetani, gave Ninfa its natural English-influenced style. Lelia, the last of the Caetani gardeners, who died in 1977, was responsible for the final version of the artistic planting that we see today. Ten years after her death, the Foundation Roffredo Caetani di Sermoneta was founded to ensure the preservation of Ninfa.
Ninfa has a wide range of unique flowering trees, shrubs and perennials planted on the property to create a spontaneous and luxuriant scramble of plants that feel decided unplanned. Lauro Marchetti, the youngest son of Ninfa's estate manager is now the guardian of the preservation and development of the gardens. I was very fortunate indeed, to have my friend, Lynden Miller, make arrangements with Mr. Marchetti to see Ninfa when I was in Italy. In fact, I visited Nina on a day when the garden was closed to the public and I had the entire garden to myself for the afternoon. It was an magical day that I will not soon forget. At that time, I did not have a digital camera and I would talk a series of photographs and tape them together to create panoramic views of gardens. These pictures are copies of those original photographs. If you are interested in reading more about Ninfa, Charles Quest-Ritson has written a beautifully illustrated book called Ninfa: The Most Romantic Book in the World which I highly recommend.
Posted by Unknown at 1:01 PM

Email ThisBlogThis!Share to TwitterShare to FacebookShare to Pinterest
Labels: Ninfa