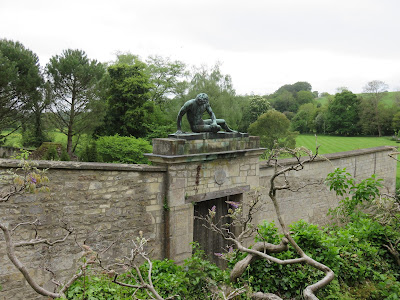 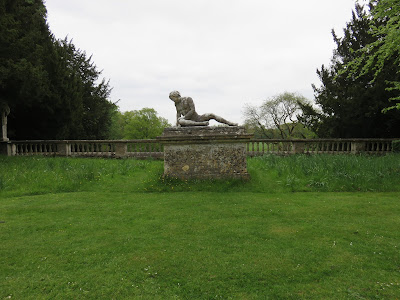 It wasn't until I was looking through all my photographs of the Passionate Gardener's Tour last May, that I noticed two of the gardens had versions of the same statue called The Dying Gaul. I had vaguely heard of The Dying Gaul from the 2005 film with the same name, but I needed to do some research to understand the historical significance of the statue in these gardens.

The most famous Dying Gaul statue was created from marble during the first or second century AD, and is located at the the Capitoline Museum in Rome. It is a copy of a bronze Greek original made a century earlier. The original statue, which was lost, or more likely melted down, was made by by the Hellenistic sculptor, Epigonos. The Dying Gaul was a monument to commemorate Hellenistic victories over the invading Gauls in what is now Turkey. The statue depicts the final moments of a Gallic warrior. When the Roman statue was brought to the United Sates, Earl A. Powell III, director ofNational Gallery of Art stated that, "the Dying Gaul is a deeply moving tribute to the human spirit. An image of a conquered enemy, the sculpture represents courage in defeat, composure in the face of death and dignity.”

William Kent, who designed the gardens at Rousham from 1733-1740, chose this statue to highlight the military background of his client, General James Dormer-Cottrell. The statue at Iford Manor, an Italianate garden designed by Harold Peto in the early part of the 20th Century, was a much newer reproduction made of bronze. Petro was a devotee of Italian gardens and liked to use ancient fragments of masonry and old buildings to create a feeling of the past in his gardens.

You can see both gardens and statues this September, when I will be hosting a tour called Late Summer Gardens of Southern England. For the itinerary, look here. For more details, visit the Discover Europe website here. If you have any questions, you can reach me directly at mbgod@hotmail.com.