The Aftereffects of Subtraction in The Hall With Balls 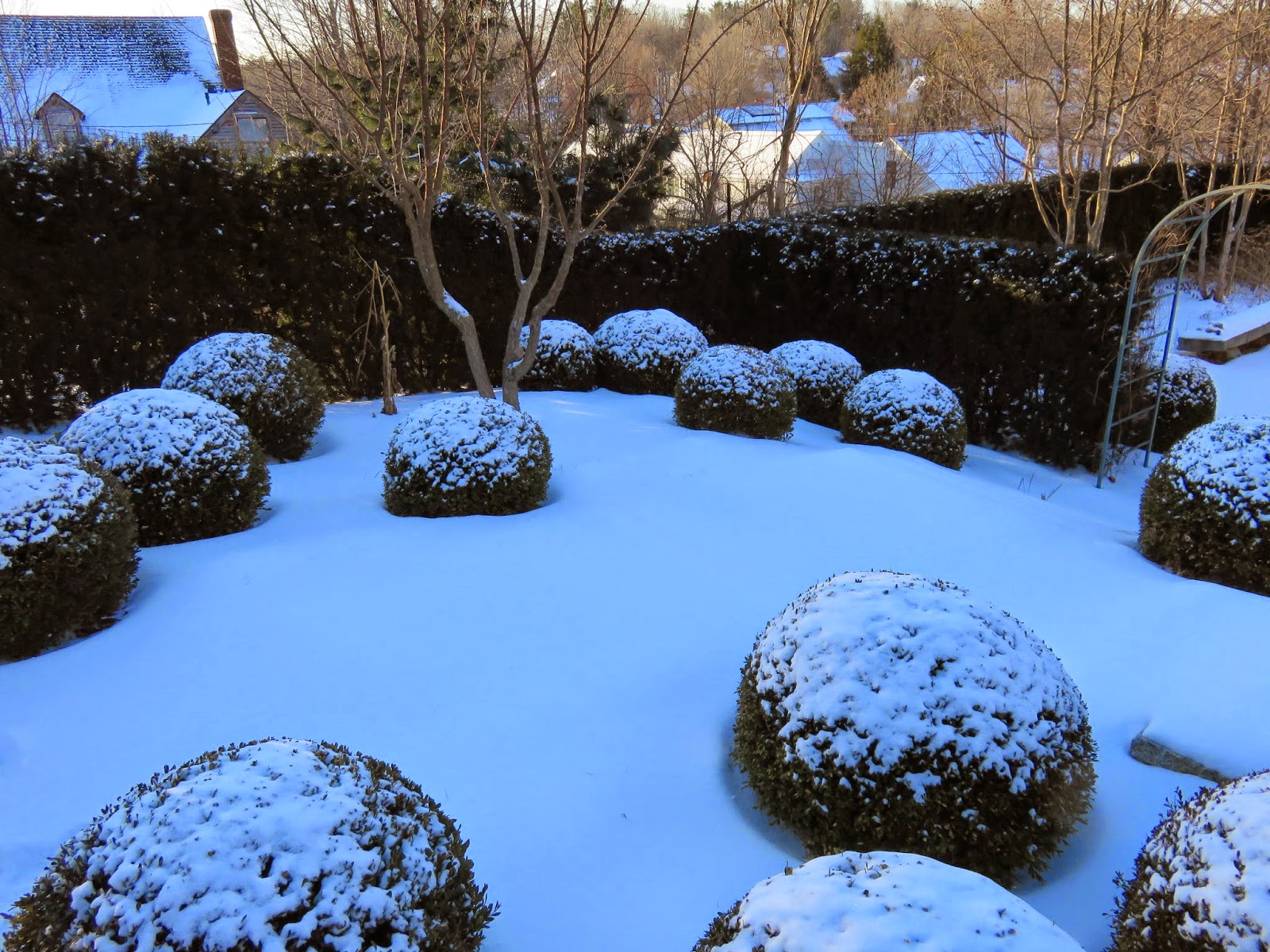 The Hall with Balls was particularly serene this past week. I always love the round boxwoods dusted with snow. The Cornus officinalis tree can be seen off center in this view and to the far left below. 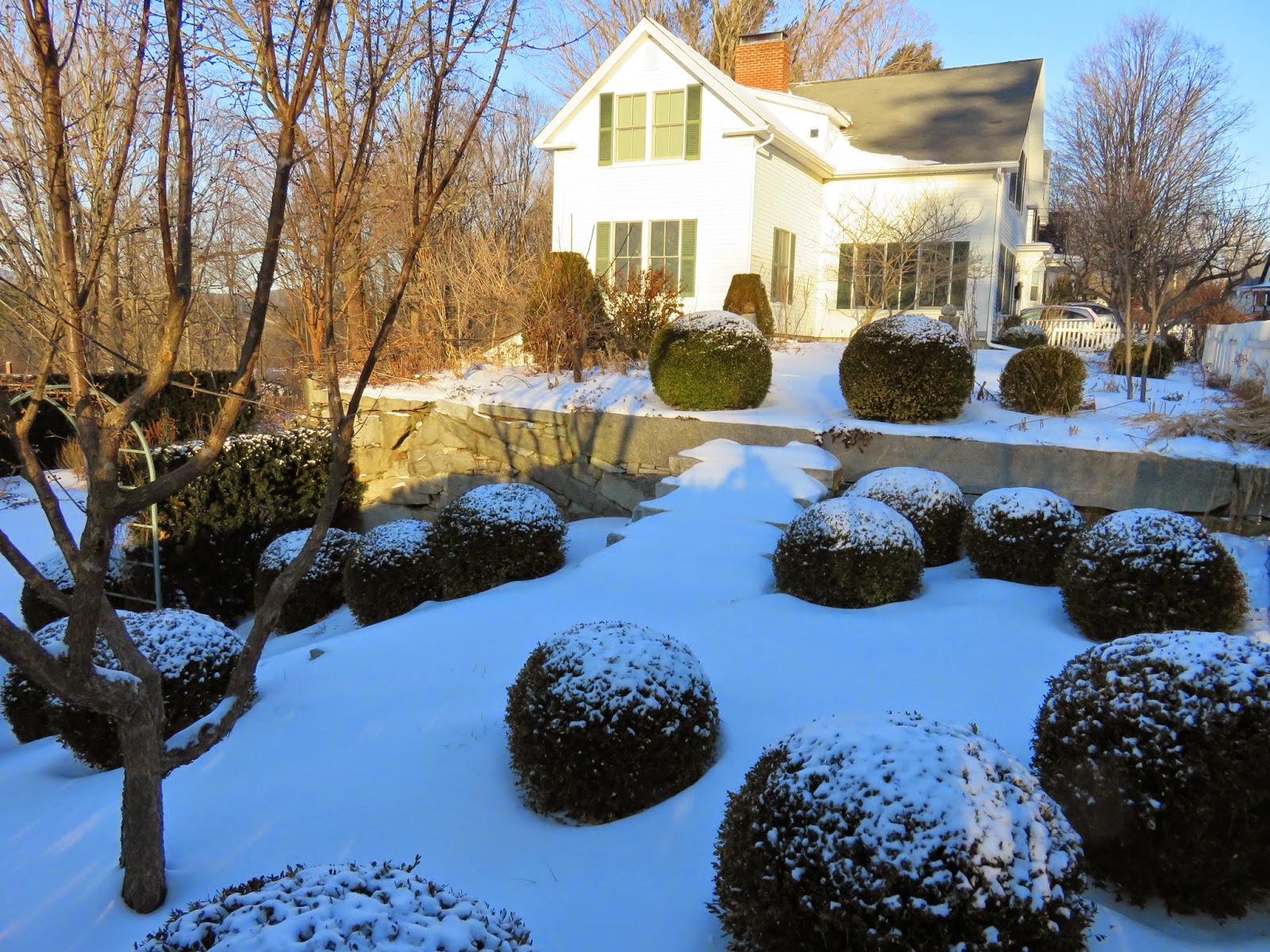 Several posts ago, I made a decision to remove two upright Junipers. In the process, a granite wall, which can be seen to the left of the steps, was revealed. I am very pleased with the simplicity that resulted. 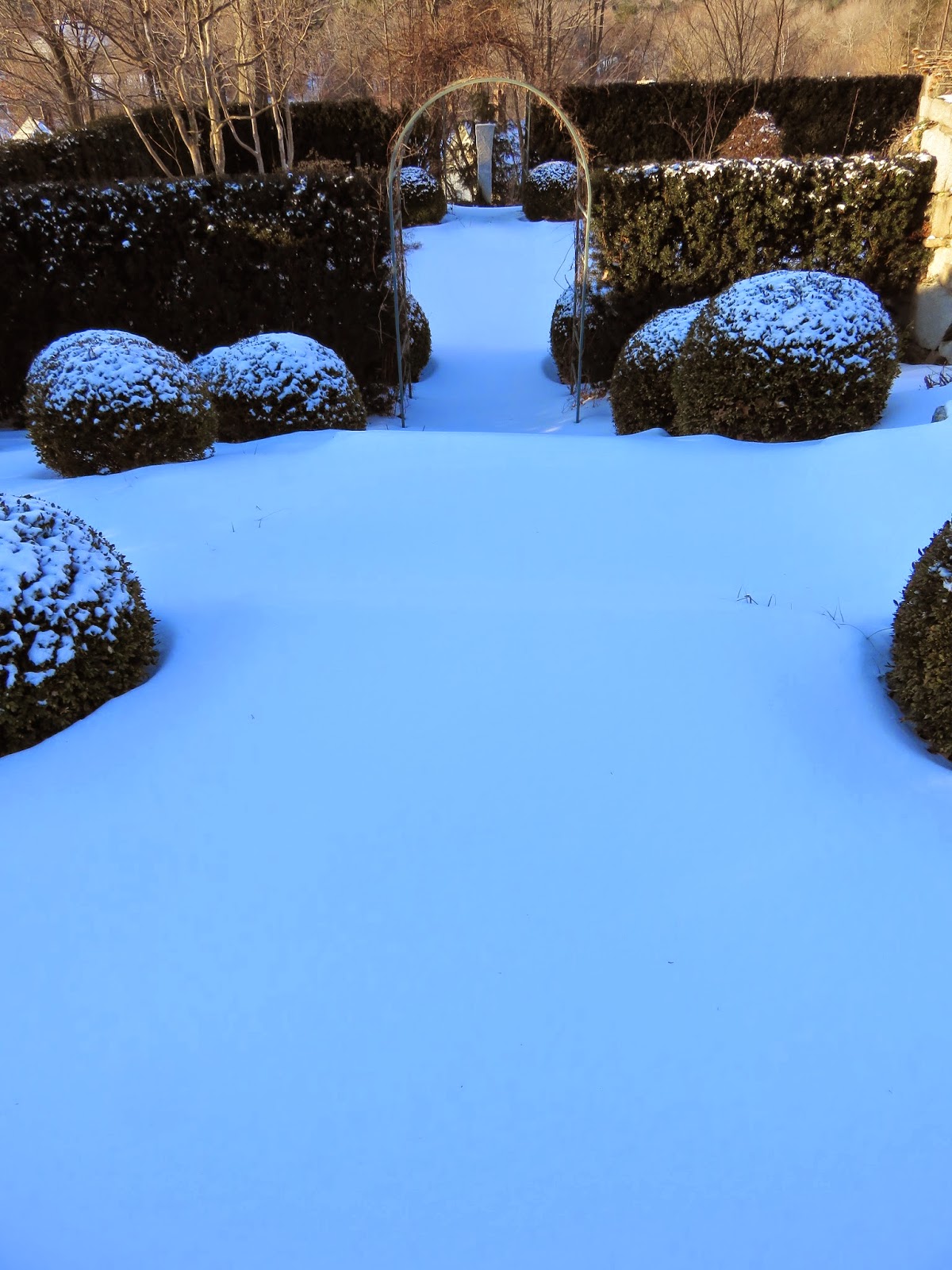 The  granite post in the Woodland Garden can be seen through the two archways looking particularly beautiful as a focal point calling the eye and the visitor forward. 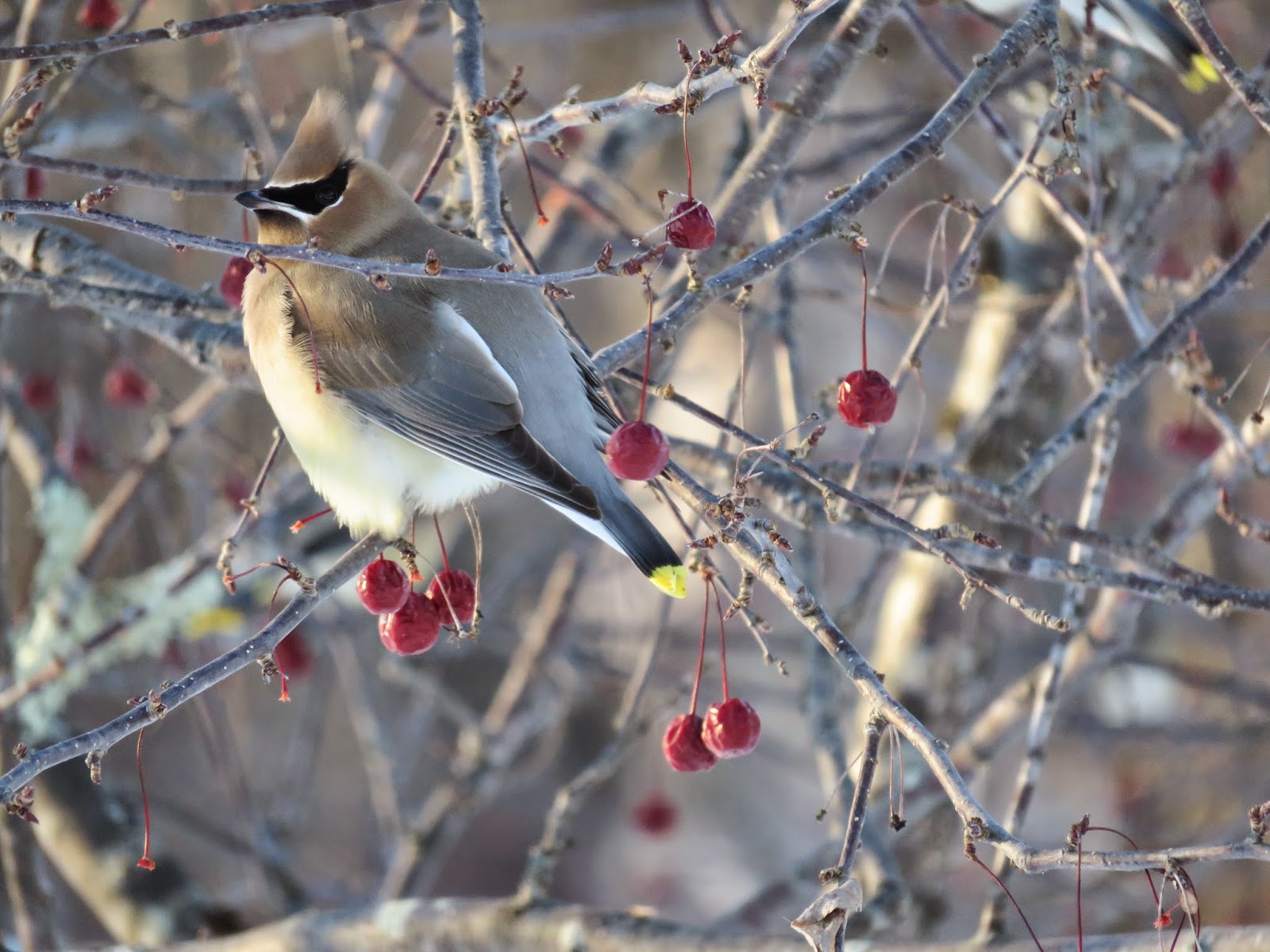 Earlier this week, I visited Teixeira Park and was pleased to find a flock of Cedar Waxwings devouring the fruit of the Malus 'Prairiefire' trees grove planted in a small grove along Union Street in West Peterborough. My intention, when we redesigned the park, was for it to have a wild flavor that would attract wildlife; especially birds and butterflies. Later, as I learned more, I concentrated on planting native herbaceous plants to attract insects to promote biodiversity. 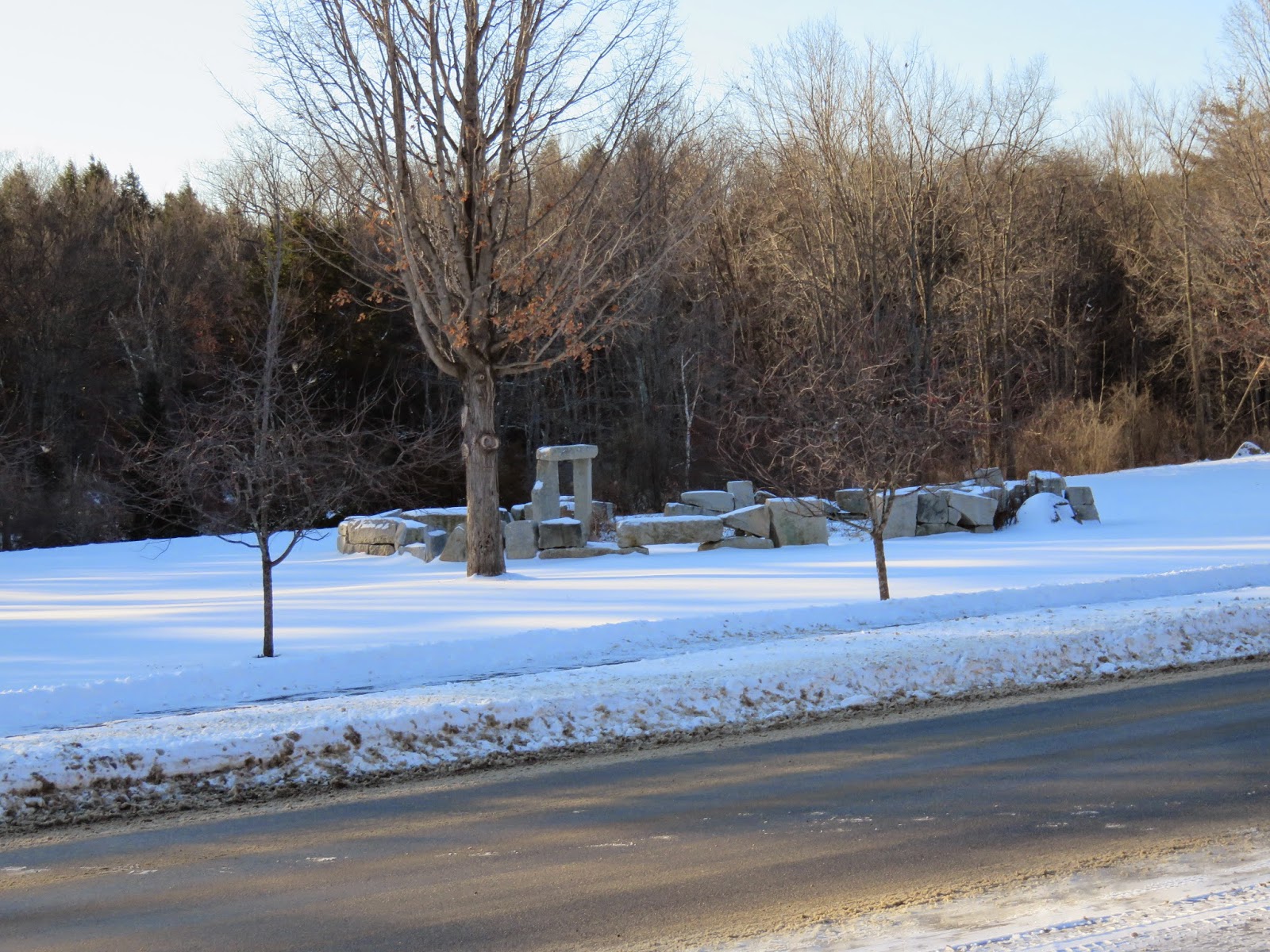 Don and Lillian Stokes, the well-known birding experts and authors who live in nearby Hancock, NH, are gardening friends. In 2005, they came to visit Teixeira Park to give me ideas on how to attract birds and butterflies. They suggested planting a grove of crabapples along the street to attract birds. The idea was that the trees would provide food but would also serve as a stepping-stone for the birds to enter the park from the woods across the street. They suggested using native dogwoods, viburnums and shadblows. They also pointed out that the Nubanusit River provided the water that birds require. All the stars were aligned for birds: food, water, cover and nesting oppurtunities. 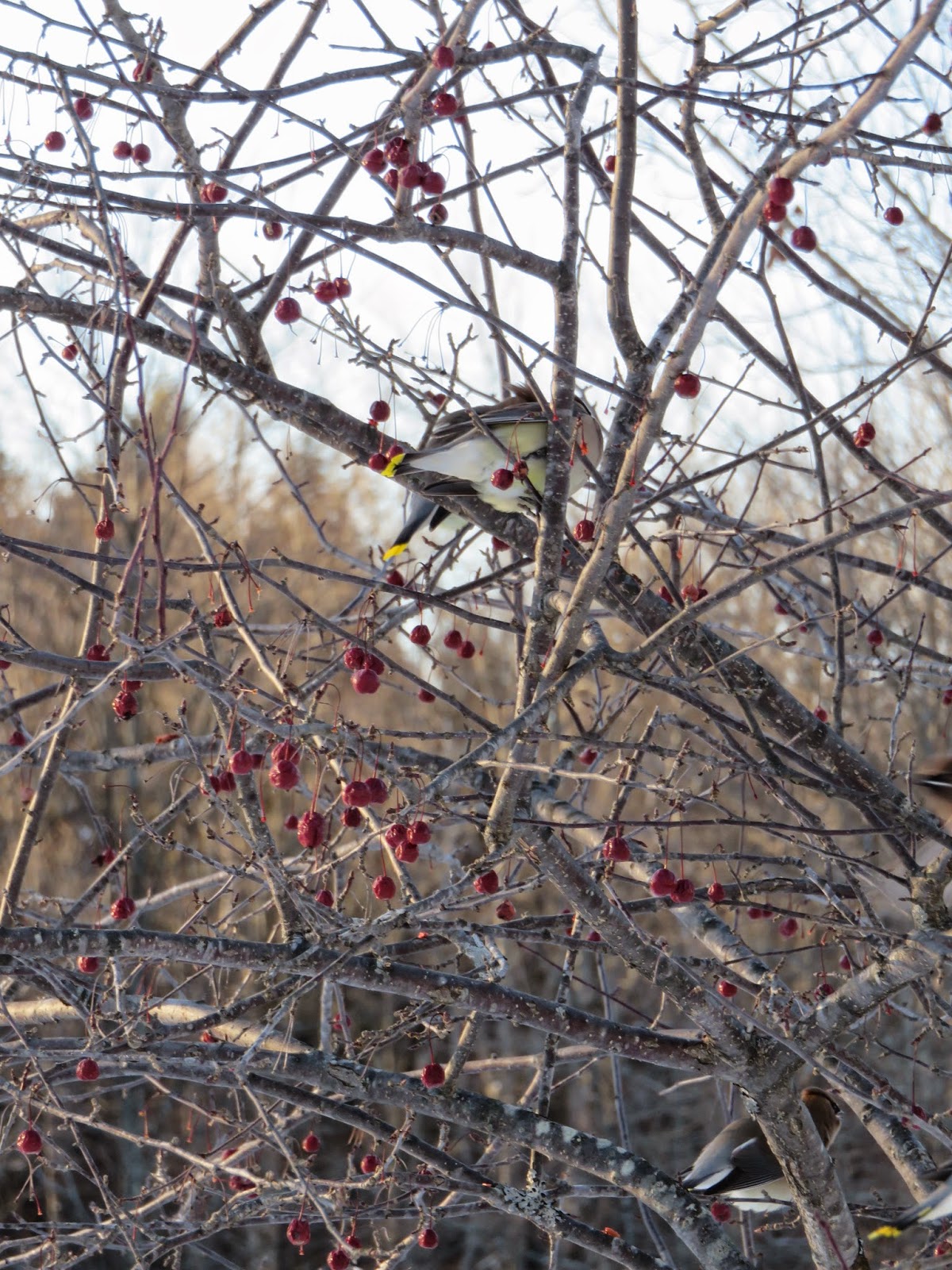 Six years later, I was pleased to read in Doug Talamay's book Bringing Nature Home that crabapples are fifth on the list of woody plants that support the order of Lepidoptera (the moths and butterflies), an important representative of the insect herbivores. Insect herbivores in turn are necessary for the biodiversity of other wildlife including birds. There are only four species of crabapples in the United States. Crabapples are unique in that the leaf chemistry of the alien crabapples (Malus 'Prairiefire' included) is indistinguishable from native crabapples to insects which often have a special evolutionary relationship with native species. 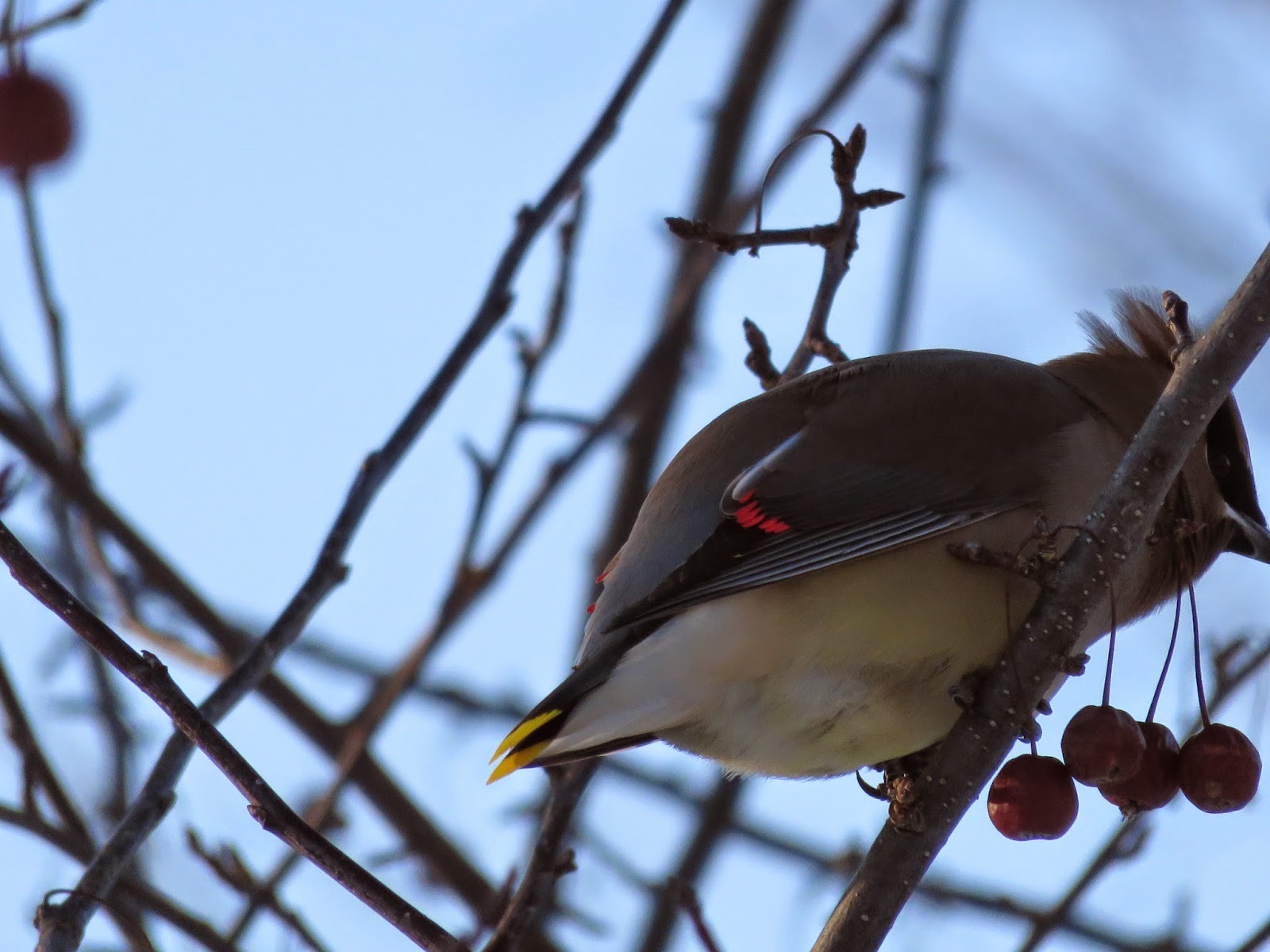 Birds, on the other hand, don't have a specific evolutionary relationship with their food: they will eat almost anything. So planting the grove of Malus 'Prairiefire' served two purposes. It provided food (fruit) and shelter for the birds while providing food (leaves) for 311 species of moths and butterflies which resulted in an overall increase of biodiversity. From a garden beauty/garden ecosystem perspective, it is having your fruit and eating it too.