Boccelli Garden at the end of July 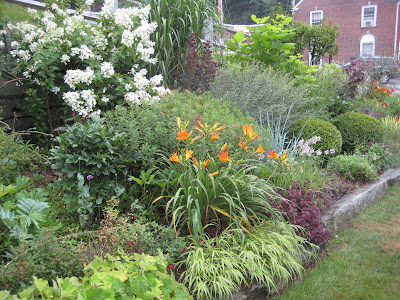 Hemerocallis 'Late Embers' not so late this year 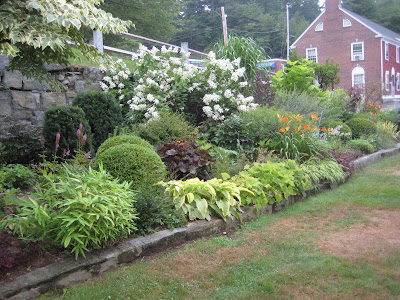 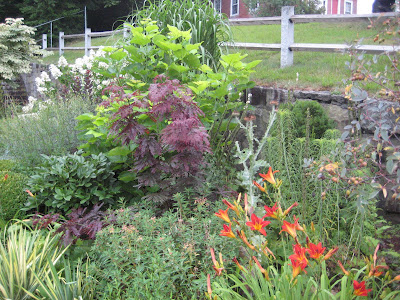 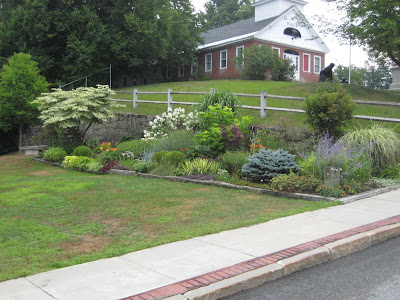 Boccelli Garden as a Drive By
Considering the drought and the heat this summer, the Boccelli Garden is looking quite respectable this week. There is a rapid-fire explosion of daylilies this year. I tried to select cultivars that would distribute a splash of color throughout the garden and the season. 'Late Embers' is almost a month earlier. Perhaps this year it should be called 'Midsummer Embers' ? 'Sandra Elizabeth', a beautiful yellow cultivar that gardening friends passed along to me is not even in bud yet, so there still is something to look forward to.
Posted by Unknown at 2:57 PM 4 comments: 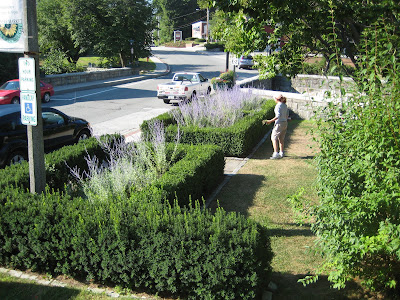 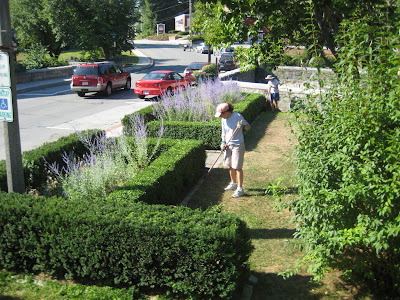 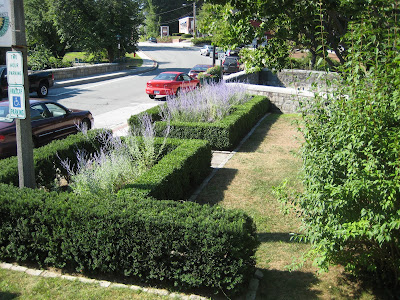 Done.
This morning the Maude, Jeannie and I clipped the hedges at Nubanusit Terrace. The earlier display of white bulbs is now replaced with Russian sage. It always looks better after its midsummer trim. It is the last garden to be clipped in the Parks and it is always a pleasant moment to stop and pause and enjoy the gardens.
Posted by Unknown at 8:40 AM 2 comments: 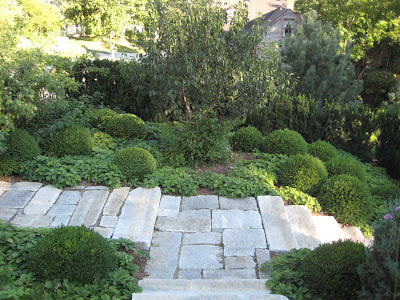 The Hall With Balls
2 Boxwoods to the left of the Cornus officinalis already Trimmed
19 More to Go!
The boxwoods are beginning to look like Don King on a bad hair day. I begin clipping them around the 4th of July and try to finish by the end of the month. There are 37 round boxwoods in my garden; 21 of them are in the Hall with Balls. I like them to be tight rounds. That way, the fluff in the perennial borders is contrasted to the best possible effect.
The Hall with Balls has box under planted with, the native pachysandra, Pachysandra procumbens, also known as Allegheny surge. I was surprised to learn it is also a member of the boxwood family. As the ground cover has filled in I have received many compliments on the simple beauty of the combination. I think of it as moment to cleanse the palate as you leave the upper hot borders and enter the lower pastel and gray borders off the terrace.
Posted by Unknown at 5:42 PM 5 comments:

Email ThisBlogThis!Share to TwitterShare to FacebookShare to Pinterest
Labels: Boxwood, Hall with Balls 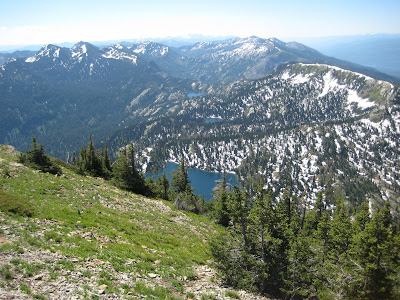 The Jewel Basin From Mount Aeneas 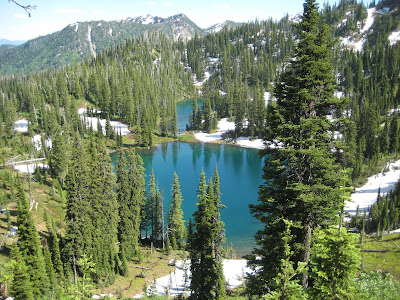 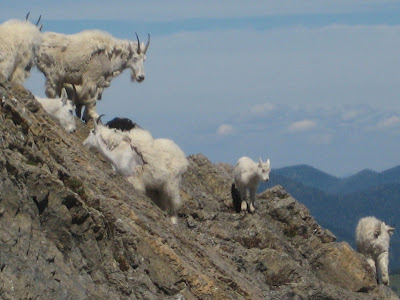 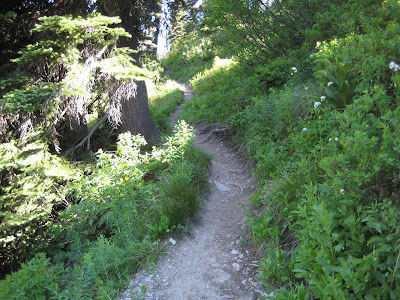 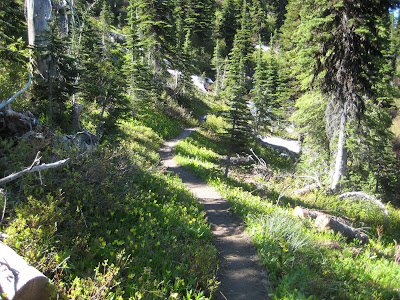 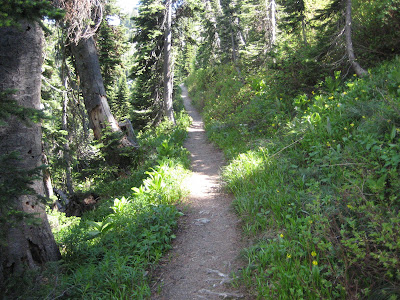 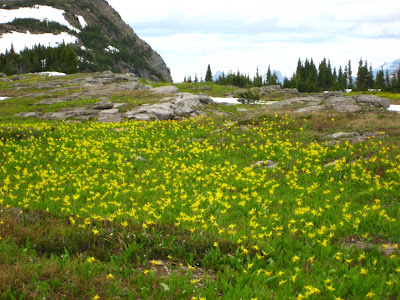 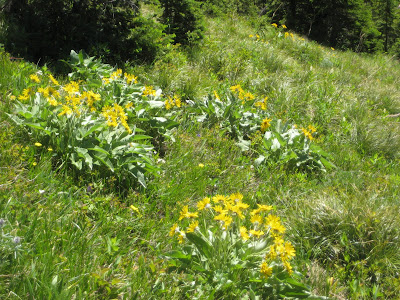 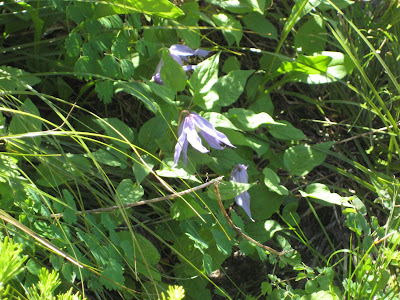 Herbaceous Clematis
Last week we visited my wife's relatives who have a house on Swan Lake near Bigfork, Montana. It was my first trip to Montana and I fell in love with this region of the state just south of Glacier National Park. We spent a lot of time on the lake kayaking, tubing and water skiing but my favorite part of the trip was hiking in the Jewel Basin in Flathead National Park Wilderness Area about a half hour drive from the house.
The Jewel Basin gets its name because the high alpine lakes that circle the basin form what looks like a jewel necklace from the air. There was quite a bit of snow still on the ground and it reminded me of hiking in New Hampshire in April. July is the best month to observe the wildflowers of this subalpine habitat. The most common flower I encountered was the bright yellow glacier lily, Erythronium grandiflorum. I often saw it in great masses in fields and drifts along the trails leading to the summit of Mount Aeneas. The green corn lily, Veratrum viride, with its wide pleated green foliage, was a wonderful contrast to the bold architectural tufts glaucous leaves of the ubiquitous bear grass (actually in the lily family) Xerophyllum tenax.
What fascinated me most was the distribution of large drifts of perennials on a small scale and the subalpine fir, Abies lasiocarpa, on a grand scale. There was much to inspire me as I continue to develop the so-called wild garden in the lower level of my garden. I am particularly interested in foliage textures rather than the ephemeral beauty of flowers which are fleeting. The plantsmen in me tends to collect small numbers of a large variety of plants which ends up looking fussy and contrived.
When I returned to Peterborough, I saw the wild garden with new eyes and realized I want to have greater masses, but fewer species, of plants with interesting textures. I can't use the exact species that I observed in the Jewel Basin but I can try to replicate the feeling they evoked. I plan to relocate several of the spruce trees, Picea orientalis 'Gowdy', to form a more natural pattern like the one I observed with the subalpine fir but this time on a much smaller scale.
The recent drought has actually been fortuitous because it has prompted me to remove plants that pouted, like Veronicastrum virginicum, for example, while I was away. I will add more of the very tough but beautiful Trachystemon orientalis and larger drifts of epimediums and hellebores. I will most likely remove the stunted sourwood, Oxydendrum arboreum, and replace it with another silverbell, Halesia tetrapetala 'U. Conn. Wedding Bells', which has survived admirably. The search is now on for interesting plants that make the grade for a mass planting and are well-adapted to the dry woodland that I am creating.
Posted by Unknown at 5:42 PM 7 comments:

Vacation, All I Ever Wanted 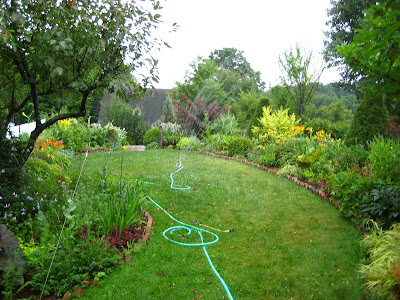 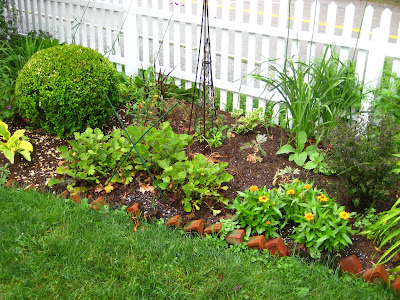 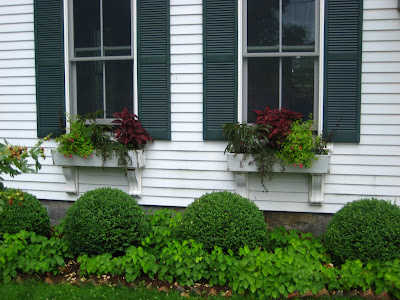 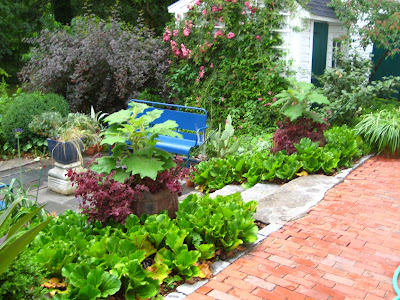 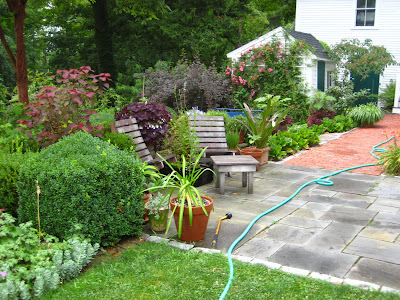 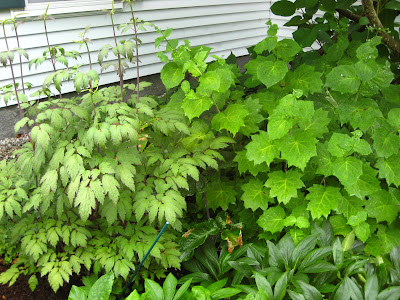 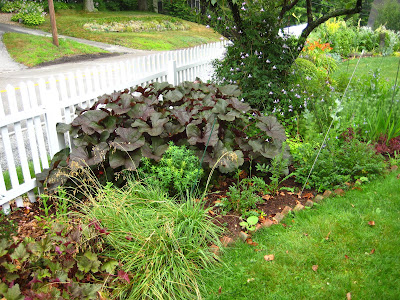 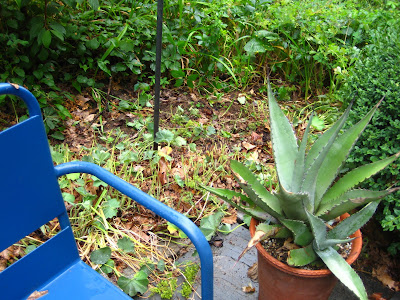 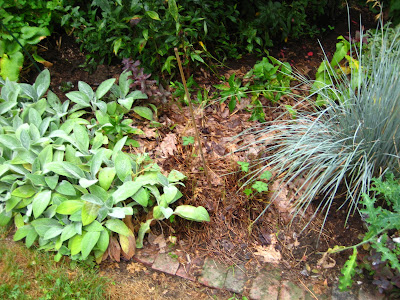 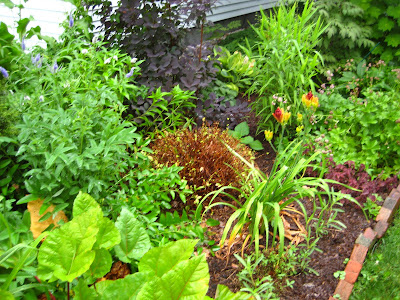 Leaving for a vacation in the summer is a mixed blessing for the gardener; especially after a 3 week drought and temperatures soaring into the 90's and high 80's for the last week. The primary concern is who will take care of the garden. For the last several years, Lily, teen-aged family friend has done the job admirably. It doesn't hurt that her mother, Joan, is an experienced gardener with an artist's eye. Lily and Joan came over this afternoon to hear the instructions.
I have been spot watering through the drought but have decided to have Lily also water with sprinklers. My garden has two levels that Lily will be watering. She will alternately spot water and sprinkler each level daily. I had the good fortune to visit Loomis Creek, a specialty nursery in Claverack , NY and acquired some plants that I am hoping will mature in time for the late summer show in the upper border. That means they will need special attention while they are settling in. Then there are the water hogs. I usually spot water these plants when I water the pots and the window boxes. Ligularia dentata 'Britt-Marie Crawford' with it huge black-purple leaves, Kirengeshoma palamata, and Cimicifua simplex 'Brunette' pout and go on to scorch during hot and dry periods. The respond well with about 15-20 seconds of spot watering during stressful periods.
Prior to leaving for a week of vacation in early July is the perfect time to cut back the foliage of geraniums, nepetas and lady's mantle to get a new flush of fresh foliage for the last half of the gardening season. Otherwise the foliage will look pretty ratty by September. I also like to cut Spirea 'Gold Mound' back in half in early July. I am not a fan of the pink flowers but the chartreuse foliage works well in my upper border. The foliage comes back a nice bright green, the perfect contrast to the bright colors in the neighboring perennials and annuals. Unfortunately, there will be a gap in the garden for a week or 10 days. I try to plan this gardener's tough love right before leaving for vacation. When I return from vacation the garden will be blowsy, lush and the annuals will be beginning to strut their stuff.
Posted by Unknown at 2:37 PM 2 comments:

My 1997 photograph of the Emerald Lawn at 45 Sanford Road, Ranelagh, Dublin 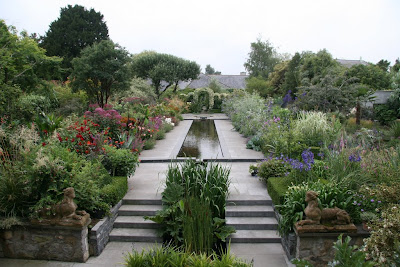 The Canal Today
(photo credit www.gardenhousebrighton.co.uk)
Dear Helen,
I forgive you. It has taken almost a decade but I have finally come to peace with the loss, at first I felt desecration, of the emerald lawn. Of course, I had seen the central lawn between the red and blue borders in pictures for years before I finally saw in it in person on June 19, 1997. I had never seen such a beautiful or more perfect lawn. It was drizzling that afternoon and I think that made the green greener and the lawn more lush than I could imagine. I was heaven, I thought, with the magnificent borders and the most interesting and unusual trees, shrubs, perennials and annuals imaginable flanking and complimented by the lawn. I will never forget that day.
Then it happened. I opened up a glossy gardening magazine and it was gone. I was devastated. I thought it looked horrific. I wondered how you could do such a thing. I could understand how difficult it must have been to maintain the lawn and how politically incorrect a lawn like that had become but to me it was iconic.
After several years, I got used to seeing the canal with its Irish limestone pavement. Several more years later I started to even like it. Now, I can't imagine your garden without it. I think you are right that it is so "completely static...that the planting in the borders at the sides can be more informal." What it taught me is to never hold anything in my garden as too sacred to change. I need to be more open to change and continue to experiment. Although I like my garden to look good, it should never be "finished." It is the process of gardening that I love.
I'm sure you must be relieved to have this awkward and difficult period behind us now. I know I am. I look forward to seeing what you do next. I promise to be open to any changes you make.
Sincerely, Michael
Posted by Unknown at 9:18 AM 5 comments: