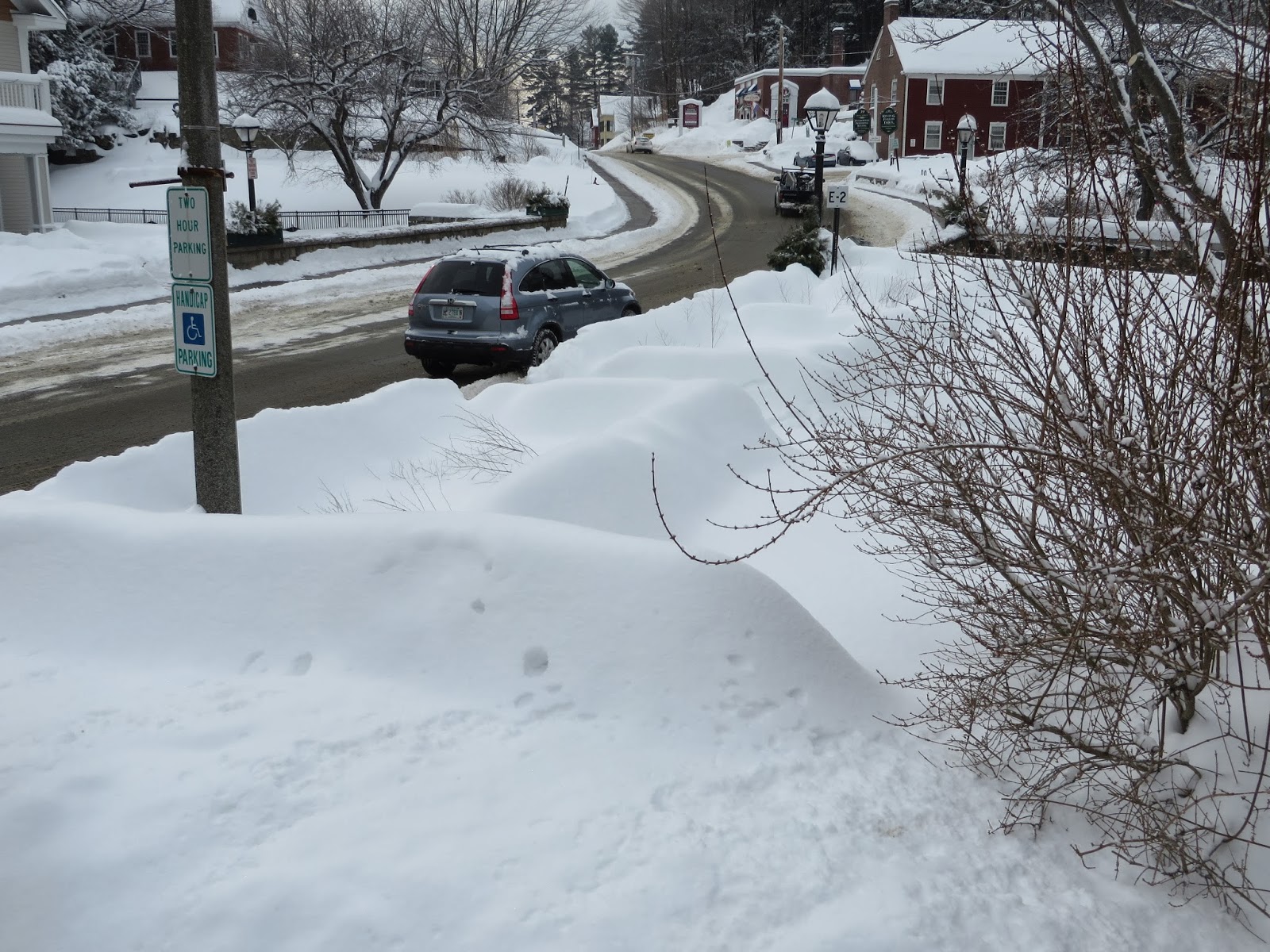 When we get a significant snowfall, we often shovel the boxwoods in the public gardens. This is Nubanusit Terrace before shoveling. 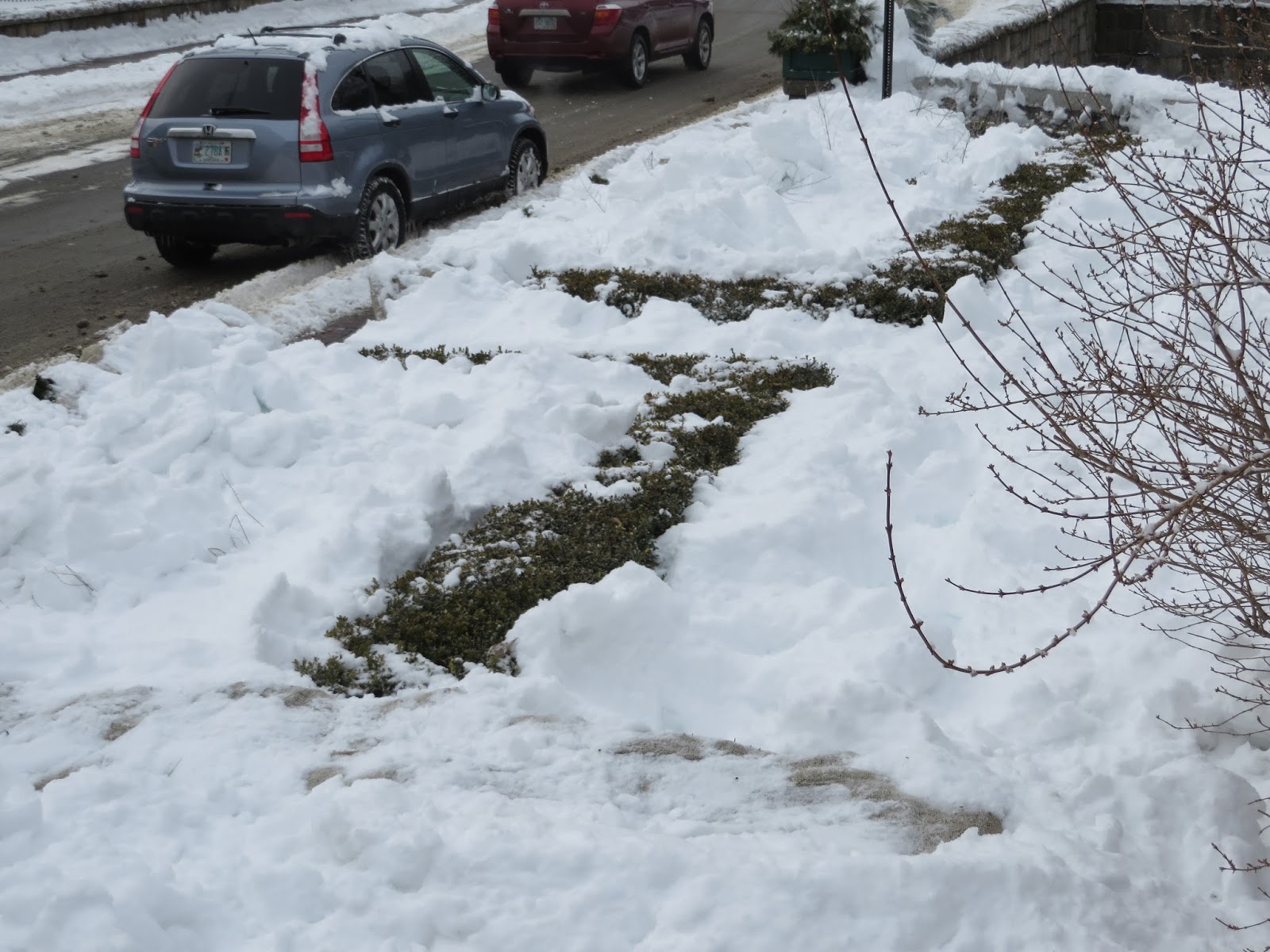 This is Nabanusit Terrace after shoveling. 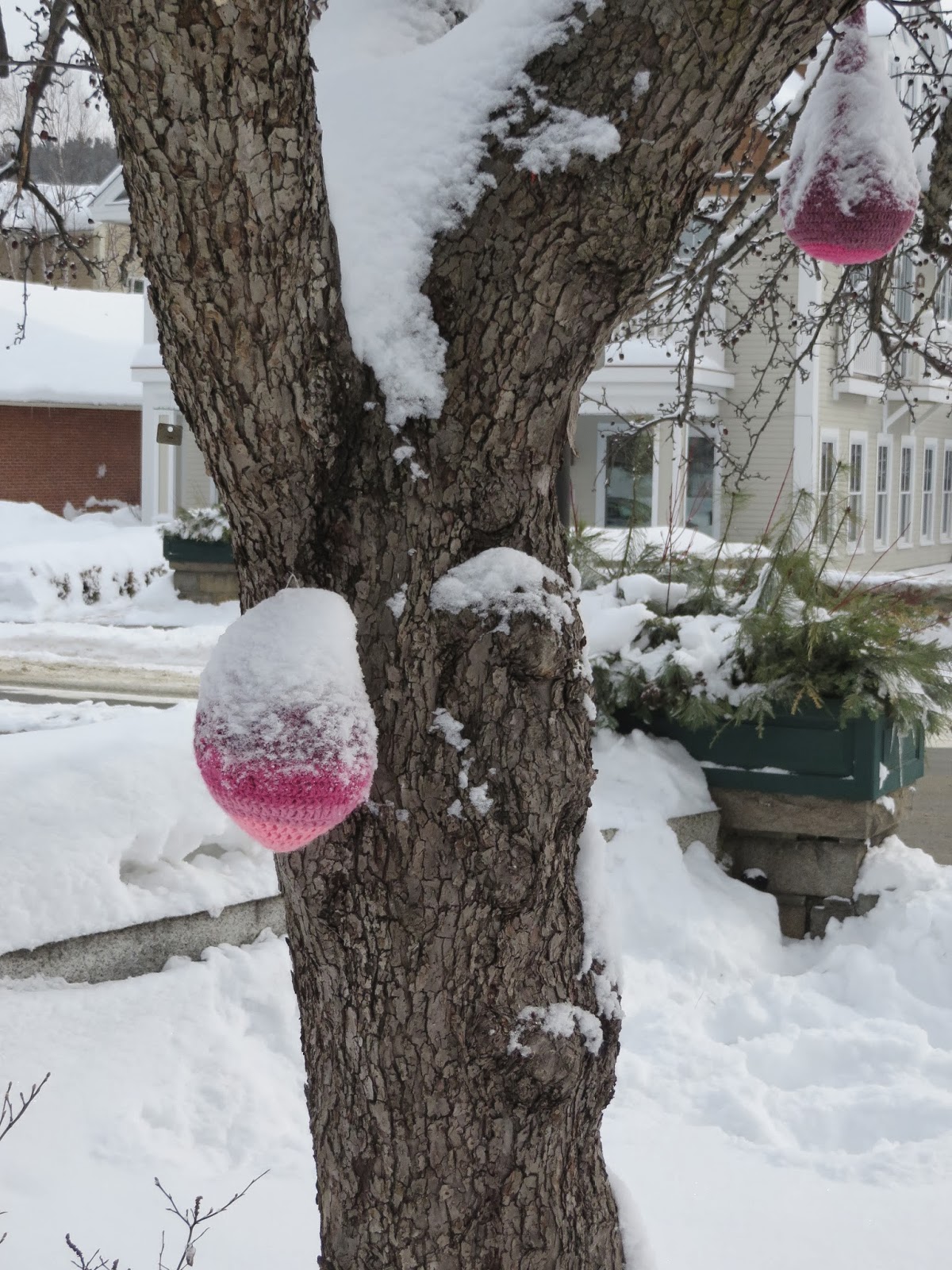 As I was working in Putnam Park I noticed an installation hanging from the large crabapple tree at the entrance to the park. 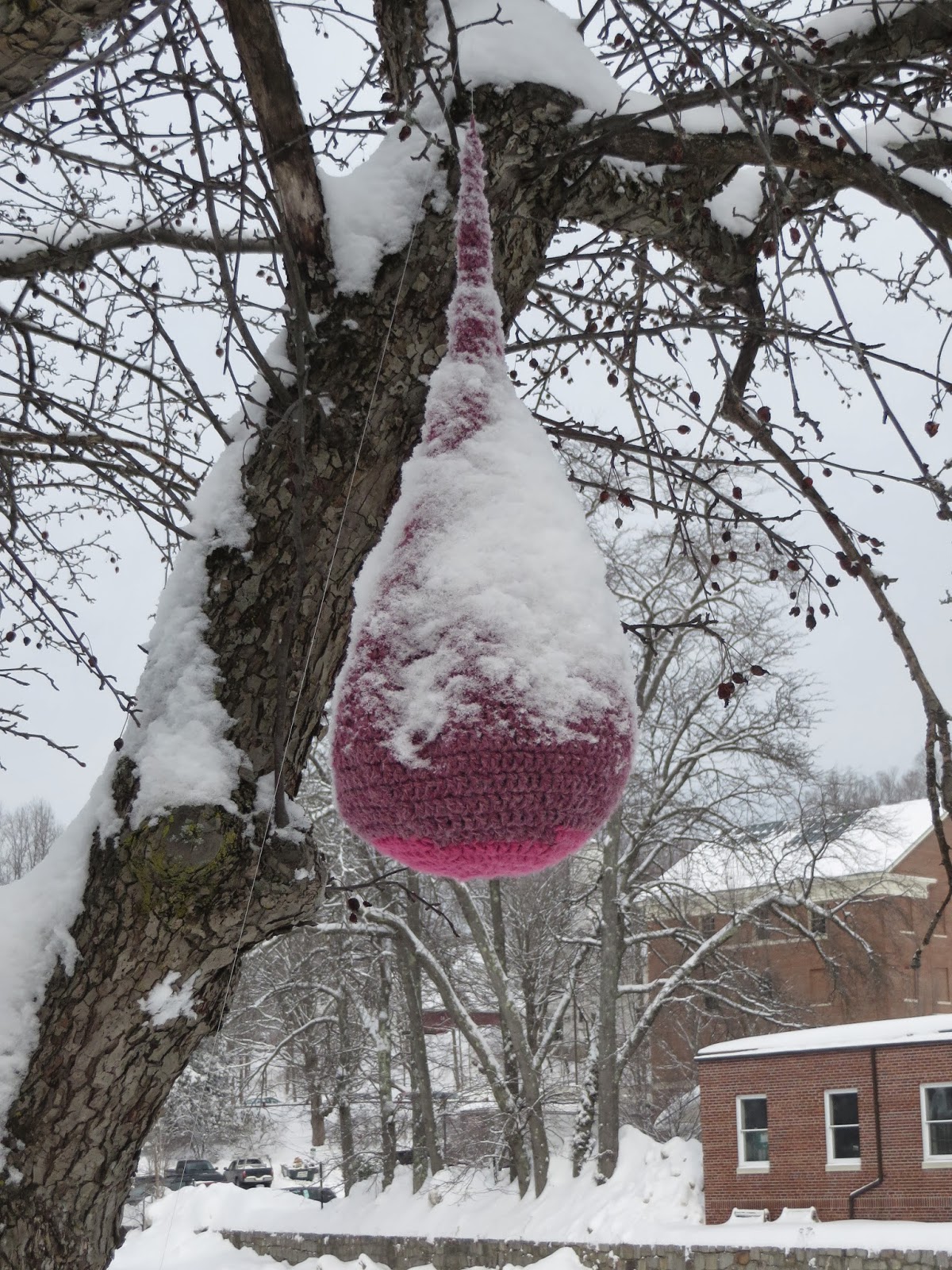 Someone hung these hot-pink crocheted artworks that made the tree look like it was wearing earrings! It was such a delightful surprise on a such a cold and dreary day. 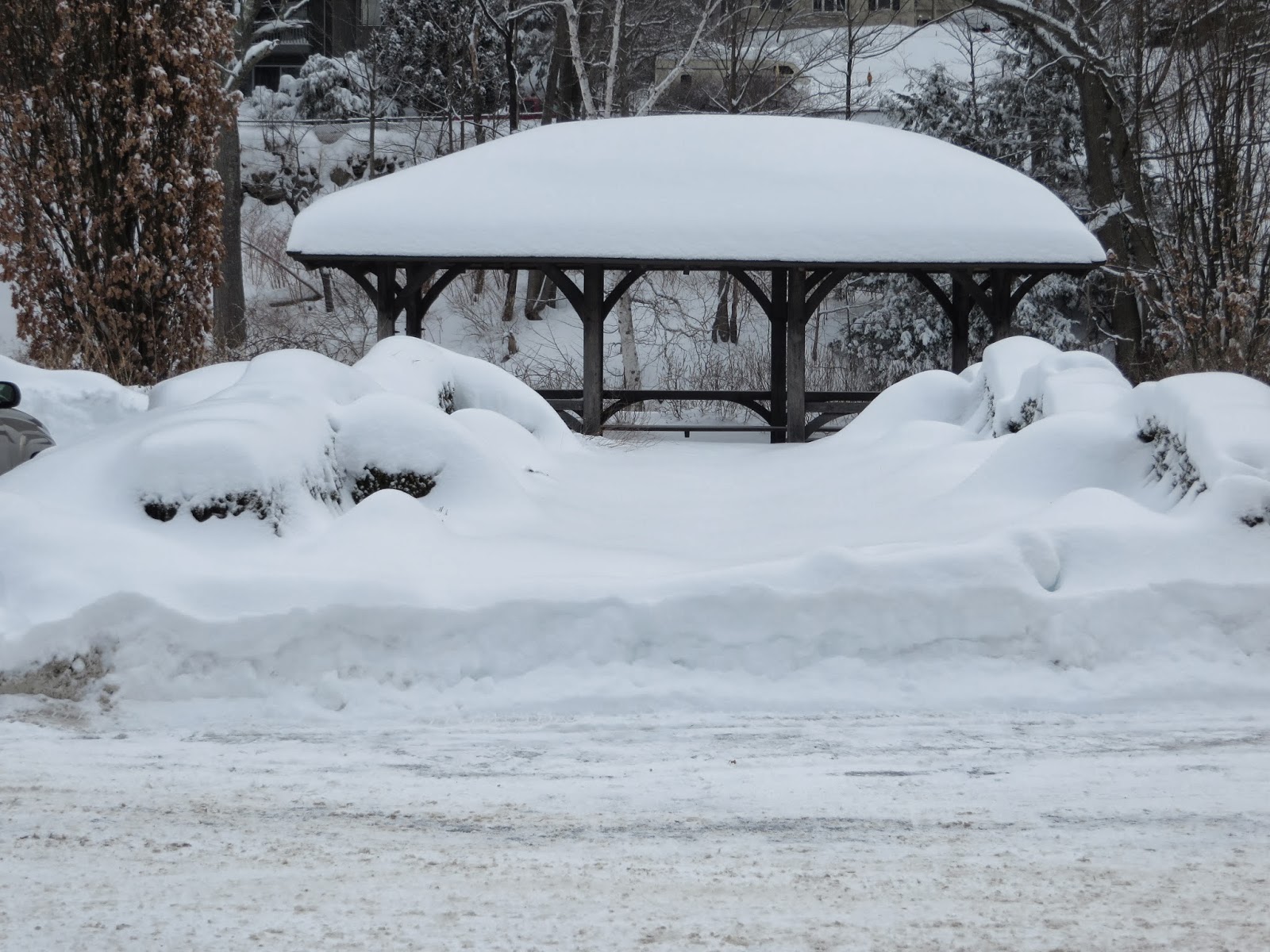 I also shoveled the boxwoods at the Pavilion Entrance to Depot Park. 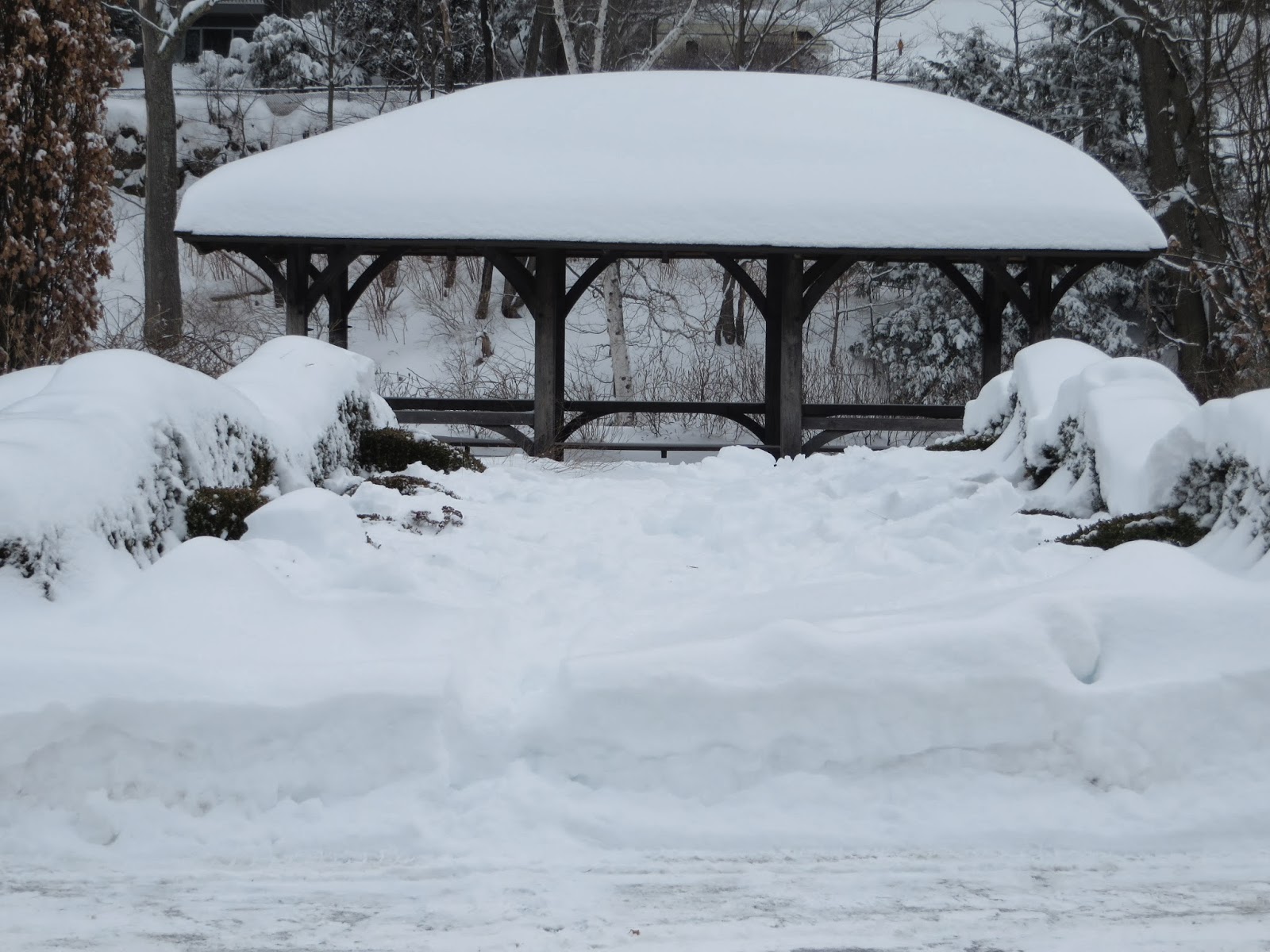 The snow was so deep, you might not have noticed that the boxwoods were uncovered. 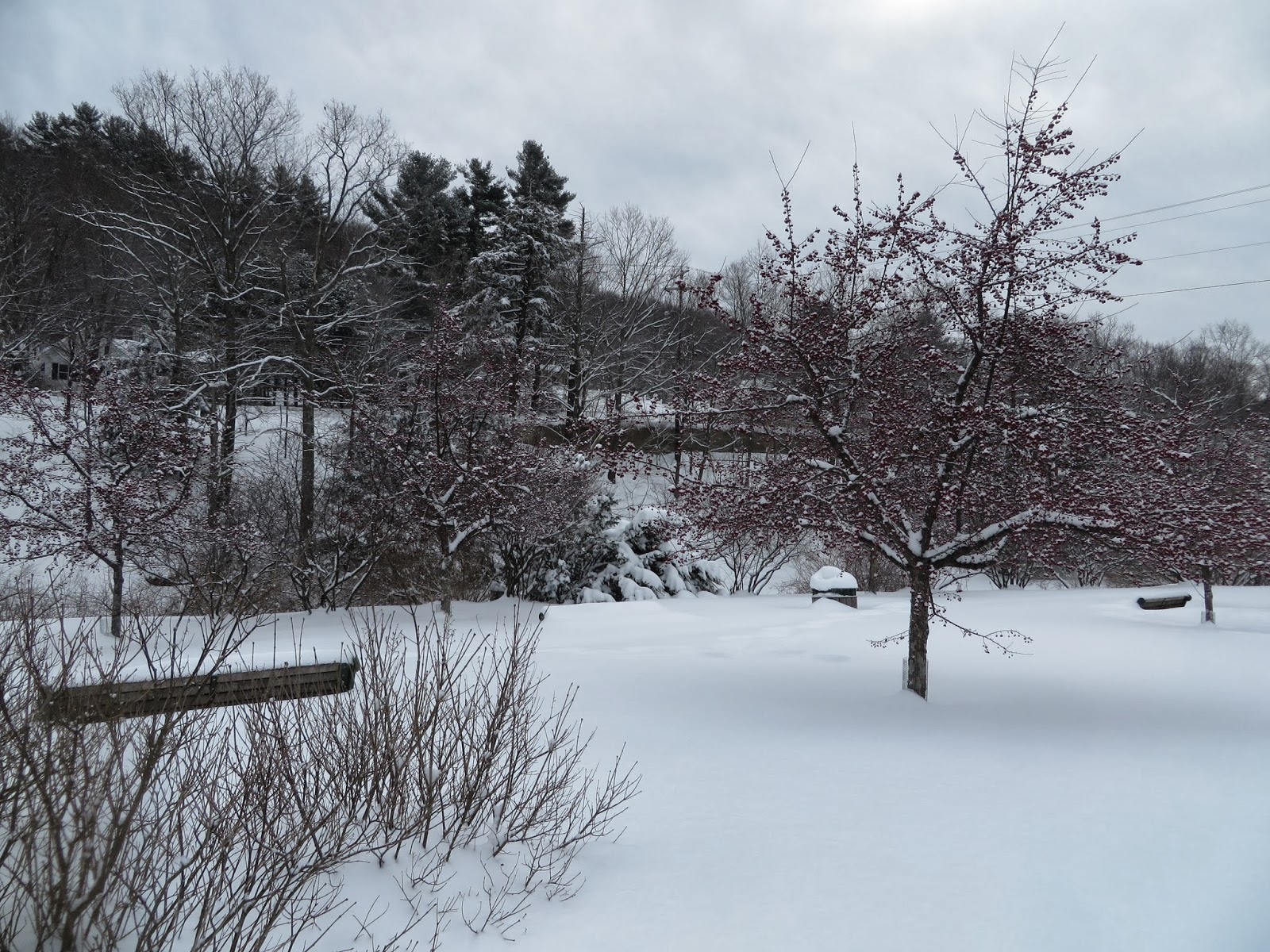 The Malus 'Snowdrift' grove seemed particularly well named today. The snow-covered fruit was awaiting the flocks of birds that will devour their fruit later in the season.

In late October last year, I attended a NYBG lecture by French gardener, ecologist and philosopher Gilles Clement. I traveled from New Hampshire and also visited the new Native Plant Garden at NYBG, The High Line, the Hudson River Park and The Brine Garden, a private garden in Pawling, NY. The gardens complimented the lecture perfectly.

Clement described a garden as a dream of what people want to obtain in the best conditions. The first gardens were a space surrounded by a fence to keep nature out. He talks about the Garden in Movement where plants physically move and the gardener chooses whether to remove a plant that grows in a path, for instance. He also talked about the Third Landscape or the abandoned spaces which are a refuge for biodiversity. 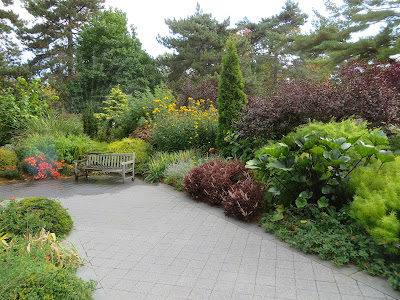 This is the Jane Watson Irwin Perennial Garden at The NYBG. It was designed by Lynden B. Miller and is a rich tapestry of texture and color. It is what gardeners would call a mixed border consisting of trees, shrubs, perennials, annuals, biennials and bulbs. 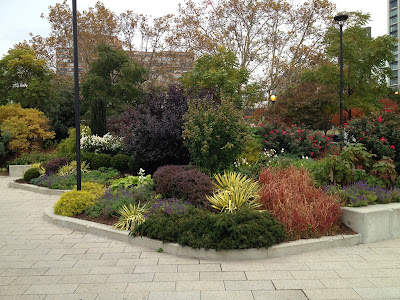 This is another garden designed by Lynden B. Miller. It is a public garden called the Chelsea Cove Entry Garden and it is located in Hudson River Park (Pier 62) in Manhattan. 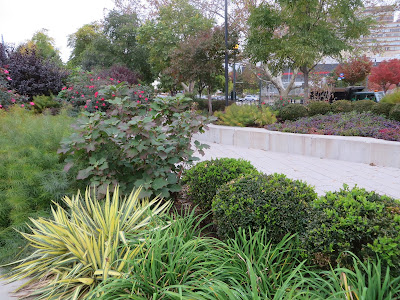 This is another view at the Chelsea Cove Entry Garden. This is clearly a designed garden. Clement would call this kind of public space a more traditional garden where living species of animal and plants that defy the gardener's control are excluded. 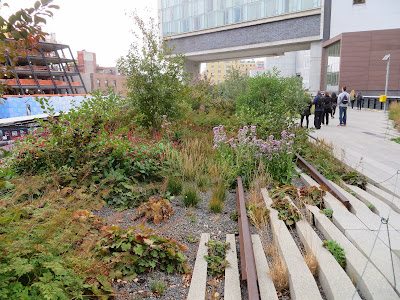 The High Line is a designed space that emulates or mimics Clement's Third Landscape. The High Line is a public garden on the sight of an abandoned elevated rail line in the Meatpacking District of Manhattan. The last train ran on the High Line in 1980 and for three decades self-seeded grasses, wildflowers and shrubs began growing. It created a beautiful leftover place where "indecision and living things that occupy it act freely". 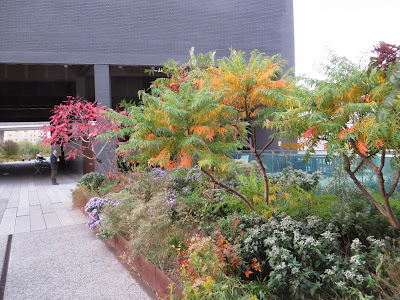 The plantings at The High Line were designed by Piet Oudolf. Many plants that landed on the abandoned rail line, staghorn sumac (Rhus typhina), for instance, were used by Oudolf in his design. 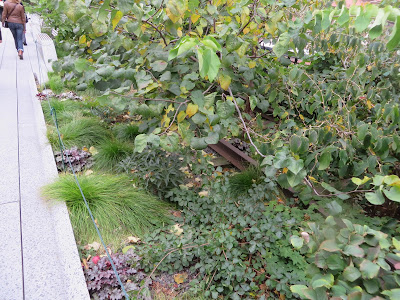 But this public space, like the work of Lynden B. Miller, is very much a designed landscape. This creeping raspberry (Rubus calycinoides) is an Asian native that would never have found its way to the High Line without Oudolf's invitation. 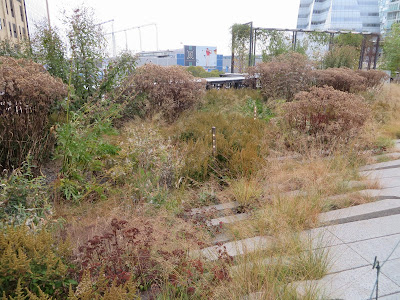 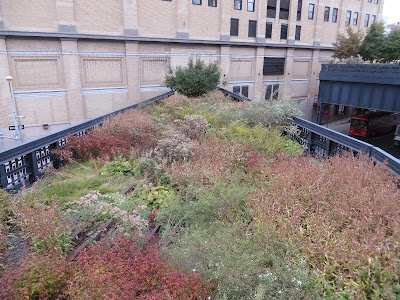 His plantings are a fantasy of what naturalized on the High Line but requires a cadre of highly skilled gardeners to keep the natural plantings looking natural. It will be interesting to see how much control Oudolf and his team will exert over the garden as it matures. What I have observed so far, makes me believe nature will not be allowed to take its own course. 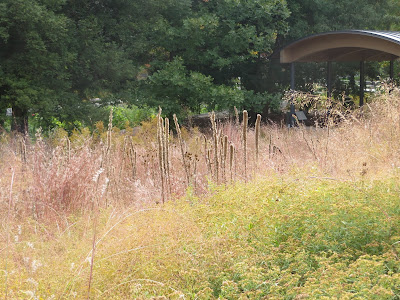 The new Native Plant Garden at the NYBG reminds one of Oudolf's more recent work but is even more natural looking. The plant palate is limited to plants native to northeastern North America. It looks pretty spectacular in its first season. 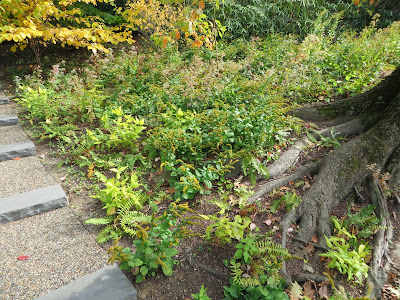 The arrangement of plants in the woodland garden reminds me of hikes that I have taken in the Appalachian Mountains. It is a fantasy of what might have been there before Europeans came to the Americas. 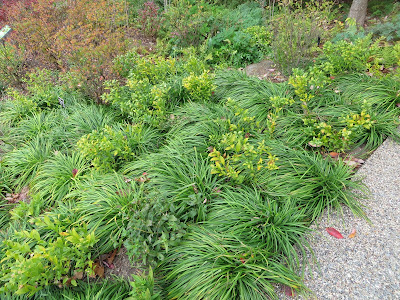 This combination of plants looks similar to Oudolf's mature style of intermingling rather than planting in blocks or drifts. You can see that both Oudolf and the designer at NYBG are imitating nature. In this case the palate of plants is strictly limited to natives and all exotics will be eliminated. Again, it will be interesting to see how much resources will be required to maintain this effect. 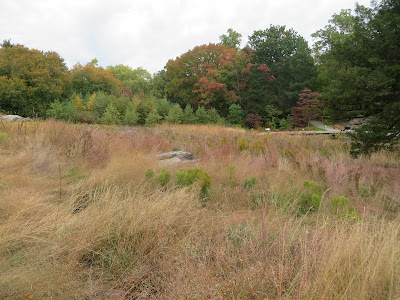 This large open planting at the Native Plant Garden at the NYBG looked very natural. In northeastern North America, a meadow like this would be in constant jeopardy of quickly becoming a forest. 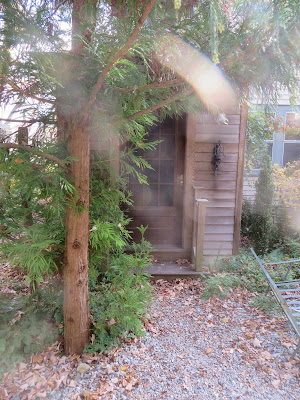 The Brine Garden in Pawling, NY was particularly interesting to visit after hearing Clement speak. This private garden was designed by Duncan and Julia Brine and uses a naturalistic and very untraditional approach. This Japanese cedar, Cryptomeria japonica ‘Yoshino’, is planted on the edge of the pathway partially obscuring the front door to the house. 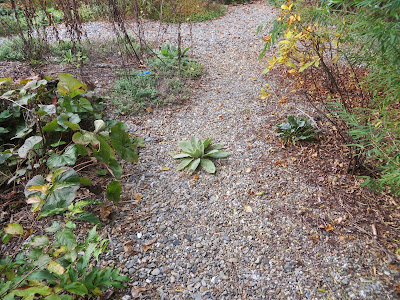 Plants were left in the pathways for the visitor to walk around.  The planting style reminded me of Clement's Garden in Movement aesthetic where plants are permitted to grow wherever they want to grow. This six acre garden used many Asian plants close to the house and gradually switched to more native plants as one traveled away from the house. 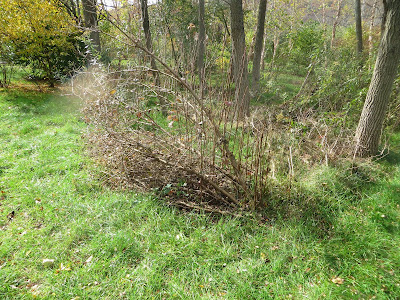 This shrub was knocked over during a storm and had new vertical shoots emerging from the roots. Most gardeners would remove the windblown stems and allow the shrub to tidily regenerate. 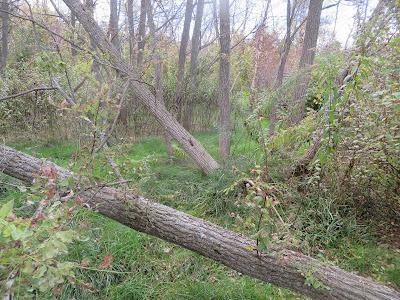 Even trees blown over in a storm where left in place. It required climbing over some the trunks. This is a very untraditional approach indeed. Again I am reminded of Clement's Garden in Movement where "the gardener aids nature rather than enacting rigid plans". Clement has a theory of the Planetary Garden where the gardener is nature's advocate welcoming vagabond species from around the world. Of all the gardens I visited, the Brine Garden seemed to achieve what Clement espouses.

You can see Gilles Clement doing a very similar lecture in English here. 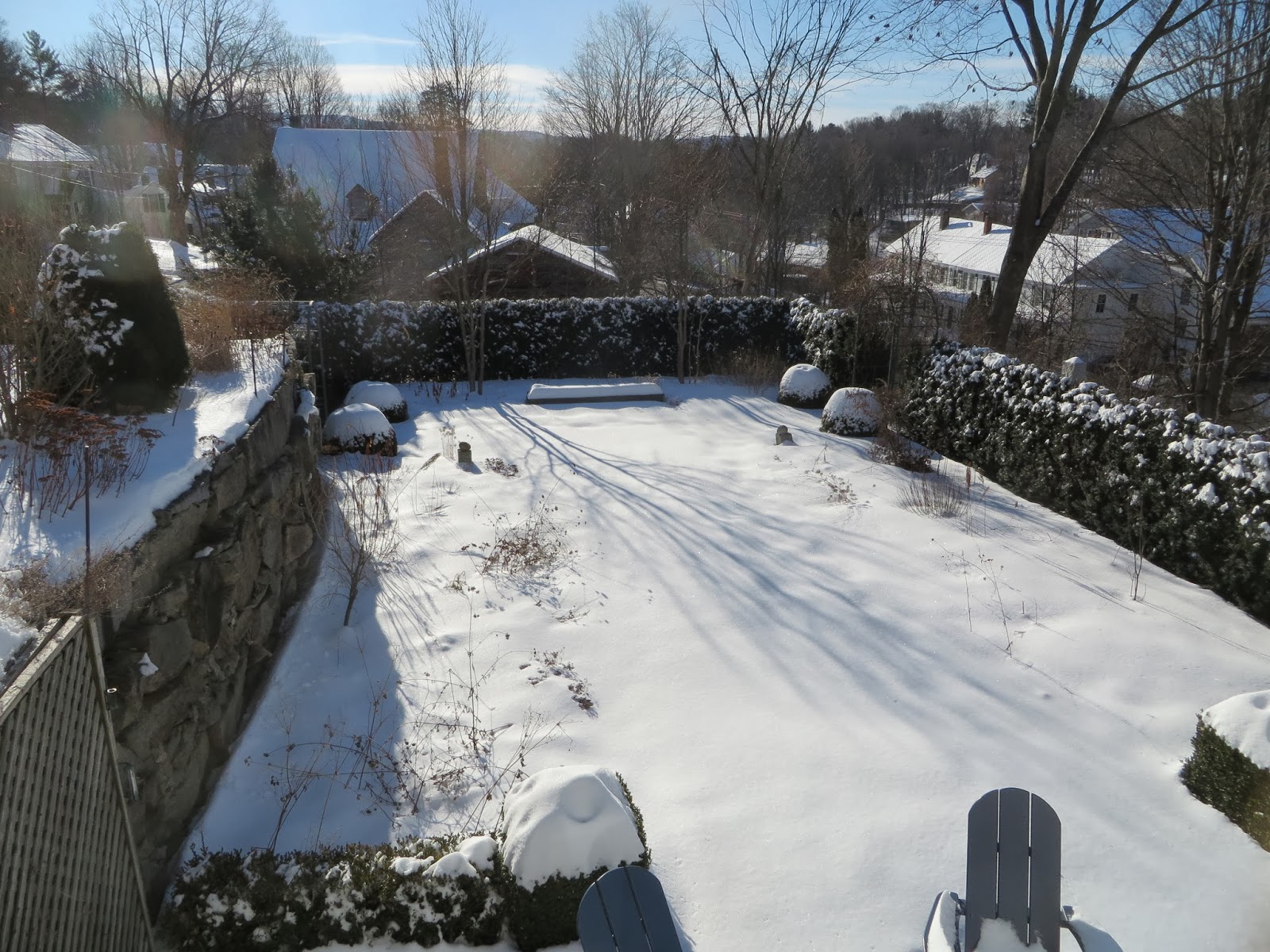 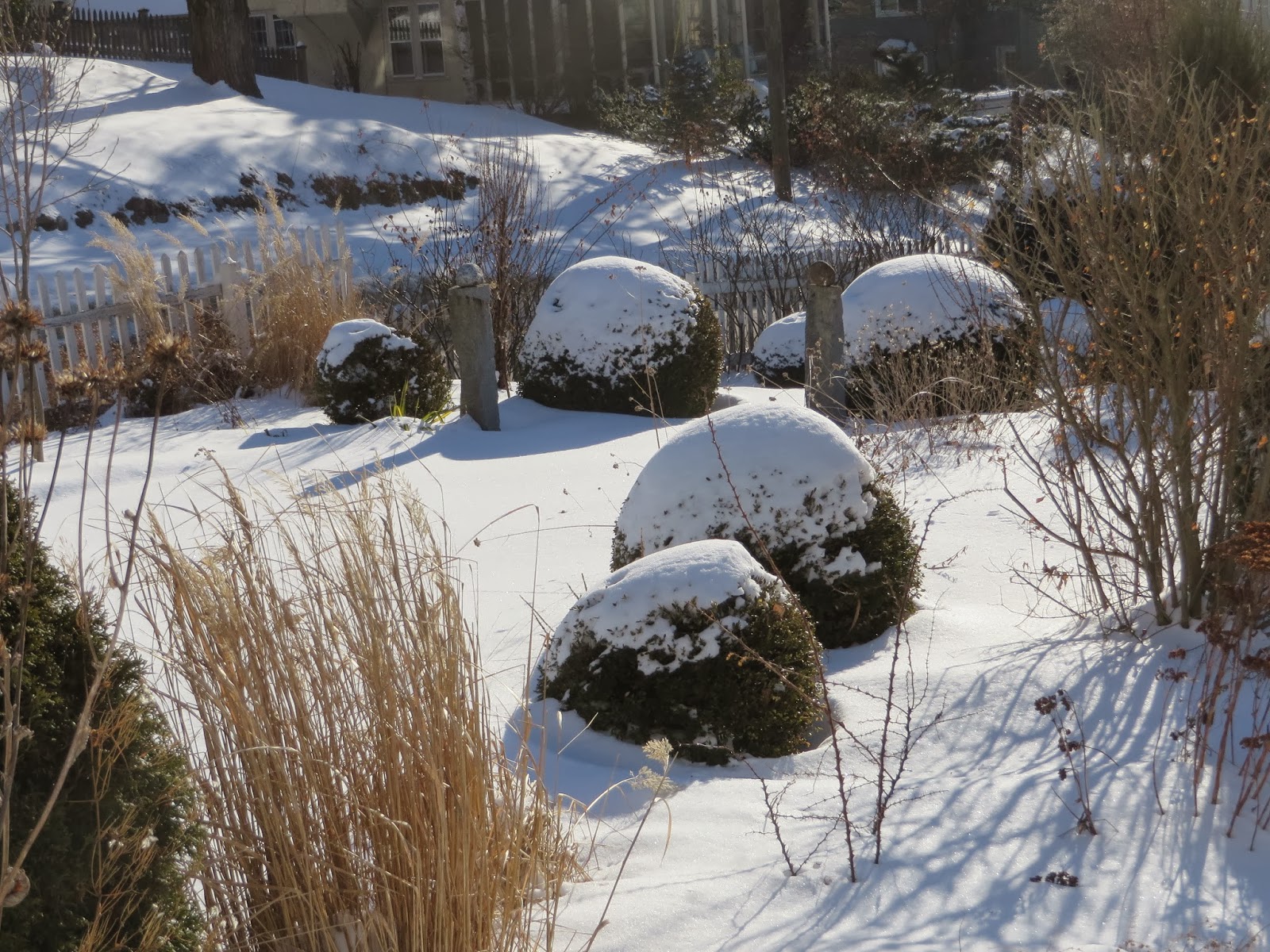 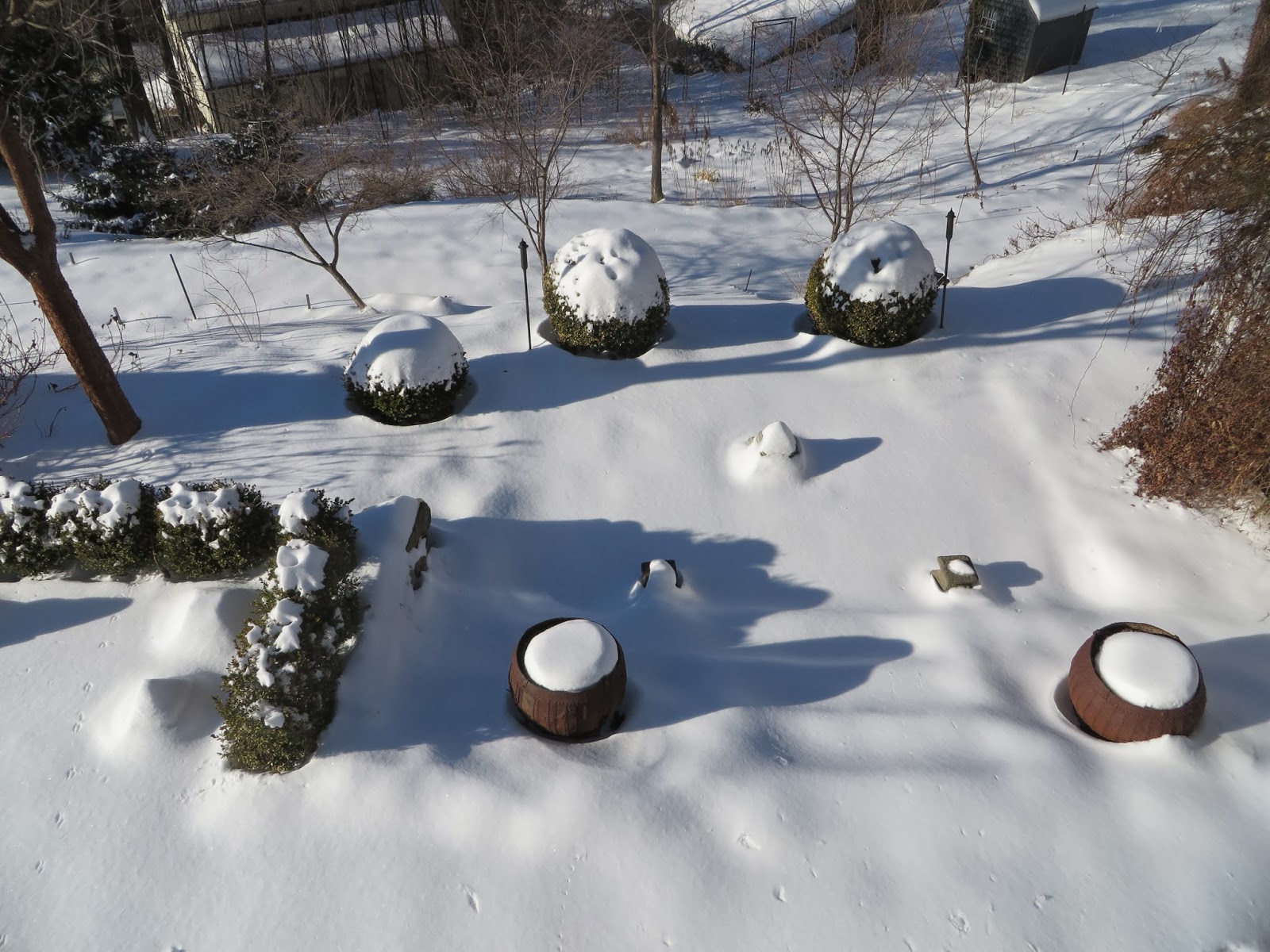 Looking Down Toward the Woodland Garden