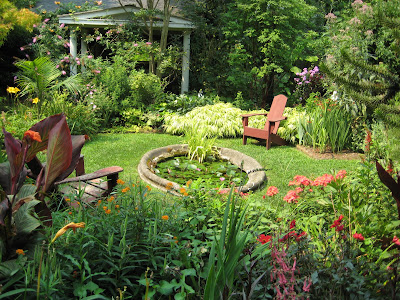 The Main Garden Room. The Adirondack Chairs were painted to compliment and contrast the colors of the plantings. Notice a glimpse of the spiny leaves of the Monkey Puzzle Tree, Araucaria araucana. 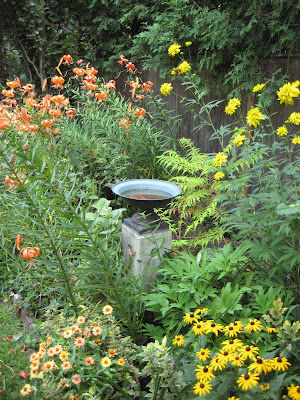 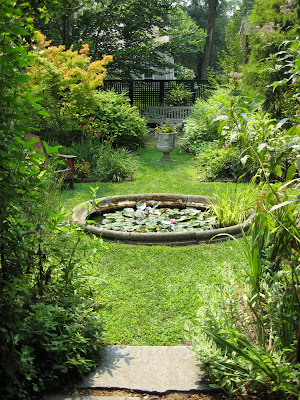 A small pool on axis with three garden rooms. 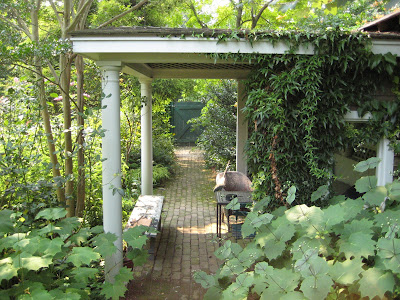 The garden house with pergola. Kirengeshoma palmata in bud. 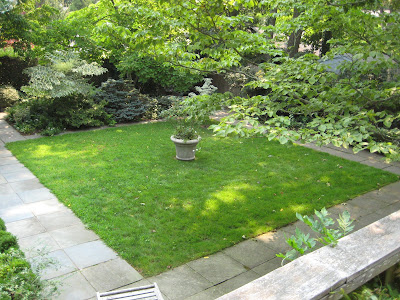 A quite, elegant square lawn that was the first garden behind the House. Aralia elata 'Variegata' at the far edge.
Lanford Wilson, the Pulitzer Prize-winning playwright, died on Thursday. Several years ago, I had the opportunity to visit his garden in Sag Harbor, Long Island. The garden, probably about a third of an acre, was divided into rooms and was designed to be an extension of the house, a two-story wood-frame house built in 1845. The house had essentially no garden that could be seen from the street. There was a walkway along the house that lead to the gardens behind the house.
Although there were countless unusual plants, many from the original Heronswood catalogue, Wilson had included many old fashioned nostalgic plants. In particular, he recalled how the tiger lilies reminded him of his grandmother. My favorite tree in the garden was the monkey puzzle tree, Araucaria araucana, an unusual evergreen tree from Chile. It has a stiff growth habit with ominous spiny stiff leaves which added an exciting texture to the garden.
The garden was quite shady with numerous inviting seating areas. Having a small garden myself, I really appreciated how the formally laid out rooms made this small in-town garden appear larger. Wilson originally divided the plot into rooms using string. He made the paths two feet wide and they were aligned on axis with one another but something wasn't quite right. Later, a garden designer friend insisted on four-foot-wide paths but he resisted and made the paths three feet wide. Finally, he conceded and made the paths four feet wide and "pop" the proportions were right.
Like all the best private garden's I have visited, Lanford Wilson's garden was a very personal and idiosyncratic creation. I was very lucky to have had a chance to visit it.
Posted by Unknown at 6:24 AM 10 comments: 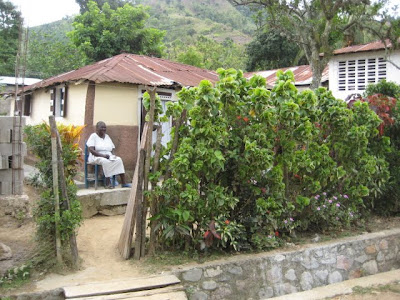 The Proud Gardener at Rest 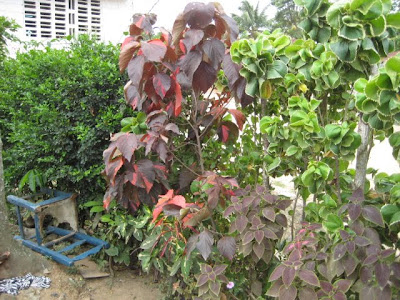 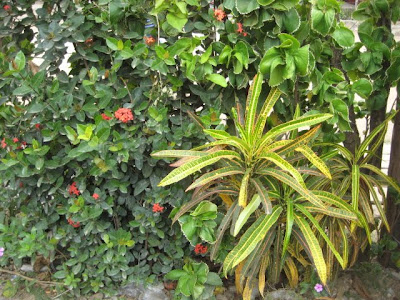 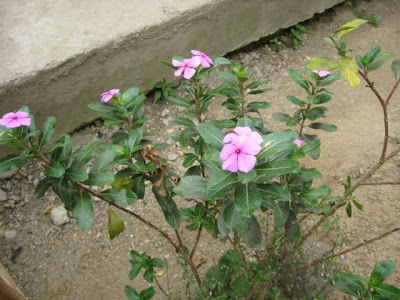 I have just returned from a week-long eye mission to Cap Haitien, Haiti. On Wednesday, we visited a small village on the outskirts of town. We did our work in a church, but I couldn't help noticing this garden next door.
The modest house without plumbing had a tidy, well-kept mixed hedge that intrigued me so I asked the woman at the gate if I might enter. She was a bit shy at first but was pleased to invite me into her garden. Inside the hedge, there was a small seating area where her family gathered to sit and talk. I immediately saw the usefulness of a hedge to create privacy in the center of this bustling village. The hedge included a plant that looked very much like boxwood. I wondered if it was a relative of Lonicera nitida because earlier in the year it had white fragrant flowers.
I was surprised to find the diversity of plants and the skillfulness in which they were combined in her humble garden. It reminded me of a Gertrude Jekyll quote which I paraphrase: it is not the size of the gardener's pocketbook but the size of her heart that makes a beautiful garden.
Posted by Unknown at 5:02 AM 4 comments:

Email ThisBlogThis!Share to TwitterShare to FacebookShare to Pinterest
Labels: Haiti

And It's Not Even Mud Season Yet!! 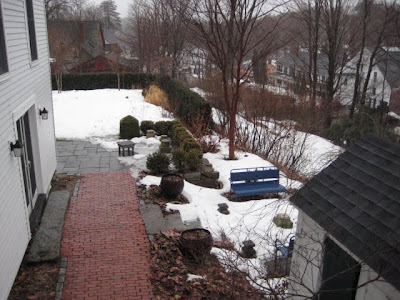 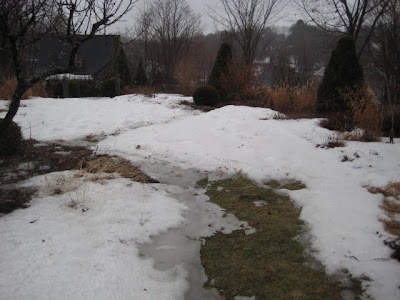 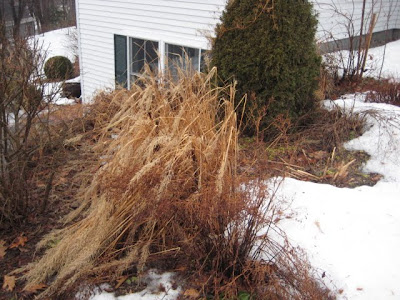 Even Oudolf would say the Calamagrostis brachytricha has got to go!
Having a gardening blog during March in New Hampshire is depressing. While everyone in Europe and most of the United States are showing off their hellebores, we are still waiting for the grey snow to melt. Next up is mud season. A New England phenomenon that occurs when the top layers of soil begin to melt while the lower levels are still frozen. It is NOT a pretty thing.
I am leaving for a week in Haiti for an eye mission. When I return I expect all the ice dams flooding the streets to be melted and the hellebores to be blooming.......well maybe not.
Posted by Unknown at 4:17 AM 12 comments:

Pangaea Woodland: The "Natives" are Getting Restless 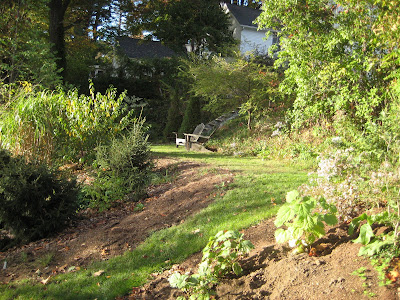 The Woodland Garden in Progress
Native plants are currently in vogue and planting them is politically correct. As I am planning my woodland garden, I keep trying define what is a native plant? In my mind, that classification is contingent on both distance and time. What is native plant for a woodland garden in the Monadnock Region of New Hampshire? How many miles away from my garden does the plant need to be found in nature in order to be considered a native in my garden? Fifty miles? Five hundred miles? Is it defined by growing in North America? How recently must that plant have grown in my region in order to be considered native? One hundred years ago ? One thousand years ago? One hundred thousand years ago?
Fothergilla 'Mt. Airy' is lovely native American shrub that is an excellent edge-of-the-woodland plant. Michael Dirr selected it at the Mt. Airy Arboretum in Cincinnati for it vigorous habit, fragrant white flowers in late April and outstanding claret fall foliage. Dirr believes it may be a cross of Fothergilla major and Fothergilla gardenii. Fothergilla. major, although hardy to Zone 4, is native to the Allegheny Mountains from northern North Carolina and Tennessee to northern Alabama. Yes, it is a native American plant, but what business does it have being grown in a New Hampshire garden claiming to contain only native plants? Native to where?
A plant that I currently have in my garden is Acer pectinatum ssp. forrestii, a rare Asian snake bark maple with handsome butter-yellow fall foliage and white-striped bark and the smaller branches which become a dark red color in winter. I chose it because it is proported to be more tolerant to difficult growing conditions than the other striped bark maples. Even the most educated snake bark connoisseur would be hard pressed to distinguish it from Acer pensylvanicum, the so-called moosewood maple, another striped bark maple which thrives in the moist shady woodlands throughout the Monadnock Region in New Hampshire. Acer pensylvanicum is closely related to Acer pectinatum ssp. forrestii, yet the live on seperate continents.
Millions of years ago, before plate tectonics moved the continents apart as they are now, the northern latitudes of Europe, Asia, and North America shared numerous plant and animal species. Genetically, Acer pectinatum ssp. forrestii and Acer pensylvanicum are nearly an identical plant. If one looked at plants from that perspective, perhaps Acer pectinatum ssp. forrestii could be considered a native in my garden.
Calling my developing woodland garden the Wild Garden doesn't really fit what I am trying to accomplish there. The Pangaea Woodland is a better way to describe my intention. I am going to take a cue from Chanticleer's Asian Woods by attempting to emulate an American woodland garden but not limiting myself to plants native to New Hampshire or even North America. The garden must feel naturalistic. The stone steps will feel like a hike in the White Mountains and I am going restrain myself from planting anything with too much variegation or oddly colored foliage. There will be no invasive species from any continent. It will be a New Hampshire woodland garden that have plants that feel right in New Hampshire.
Yes, I wil create a Pangaea Woodland.
Posted by Unknown at 5:52 PM 9 comments: