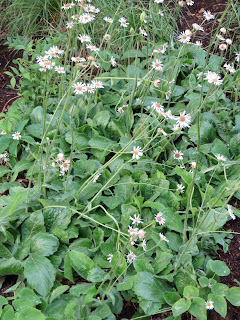 Erigeron pulchellus var. pulchellus ‘Lynnhaven Carpet’  is a new groundcover I have growing in the woodland. This plant has large greenish gray fuzzy leaves and has quickly formed a 6 " tall mat that suppresses weeds. The best characteristic of this plant is that it handles dry shade without skipping a beat. 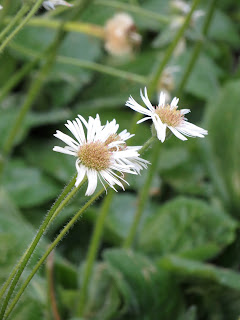 In late May, Erigeron pulchellus var. pulchellus ‘Lynnhaven Carpet’, also called Robin's plantain, has light lavender daisy-like flowers rising above the foliage on foot-long stalks. I got divisions of this plant while visiting Charles Cresson at his Swarthmore, PA garden last June. Charles, a keenly-eyed plantsman, found this plant growing on the Virginia Beach, VA property of  Clarice Keeling. He named it after the nearby Lynnhaven River. Erigeron pulchellus is a North American native grows from Canada to Florida and has proven to be an east-to-grow plant in my sometimes dry woodland.

Buddleia alternifolia in the Upper Garden 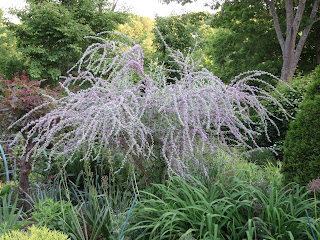 Buddleia alternifolia var. 'Argentea' in the Upper Garden is elegant and graceful. This butterfly bush can get up to 12 feet tall. I usually prune a third of the plant to the ground each year which helps keep it in scale of the garden at about 5-6 feet. The lavender flowers boom in late spring each year on pendulous branches. The silver foliage is an effective foil for the garden in the summer and fall.
Posted by Unknown at 6:23 PM 4 comments:

It was all David Culp's fault. I was reading his new book about his garden in Downingtown, PA called The Layered Garden  (beautifully written with amazing photographs by Bob Cardillo) and I came upon Ashwood Nurseries as a source for hellebores. David is an authority on hellebores and has developed a strain called the 'Brandywine Hybrids'. I was fortunate enough to procure several plants when I visited his garden a couple of years ago. When I googled Ashwood Nurseries and learned that they were located in England, I thought should bring some back when I went to the UK for The Best of English Gardens tour in May.

In February, I emailed David Culp to find out exactly how he brought hellebores back from England. He said I may need a permit and that I would need to transport them with "not a speck of soil." Next I contacted Ashwood Nurseries who could not have been nicer. They informed me that I should contact a Food and Environment Research Agency (FERA) inspector in England to get a phytosanitary certificate and that, yes, all the soil will need to be removed from the roots. They mentioned that I will need to declare the plants when I go through US Customs and that I would need the proper paperwork and possibly a permit.

When I researched which plants need permits to enter the country on the USDA Animal and Plant Health Inspection Service (APHIS) website , I was informed that I could bring 12 or less plants without a permit as long as the plants where not on the restricted list in The Lists of Regulated Propagated Material in the  The Plants For Planting Manual. I looked up hellebores and found that they would not require a permit.

I order 3 pairs of hellebores cultivars (2 Helleborus 'Ashwood Fascination', 2 'Ashwood Elegance Pearl' and 2 'Double Green Spotted') from Ashwood Nurseries to be delivered to my hotel when I was in London for the Chelsea Flower Show. Karrina, in the mail order department, was also kind enough to offer to remove most of the soil when they mailed them to me. Next I needed to figure out how to get a phytosanitary certificate in England. I checked the FERA website and learned that there was a site near Heathrow Airport where I could get my plants inspected. Mohan Pillai, PhD who told me exactly what I needed to do to get the phytosanitary certificate.

On Tuesday, May 21, we visited Great Dixter and I bought two plants at the nursery: Lysmachia atropurpurea 'Beaujolais' and Seslaria nitida. I chose them because they looked interesting and appeared  easy to transport. When I arrived at my hotel room on Wednesday, May, 2, after going to the Chelsea Flower Show, my box from Ashwood Nurseries was waiting for me. My next task was getting the soil off the roots of my plants. When I unwrapped my hellebores, I was delighted to discover that Karrina had removed ALL the soil off the roots for me. It was a good thing because I had quite a time removing the soil from the roots of my plants from Great Dixter. My bathroom was a minor mud-fest by the time I finished. 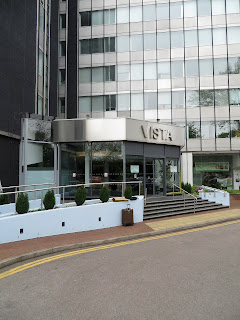 Thursday morning, May 23, I was dropped off at the Vista Centre, which is about 4 miles from Heathrow Airport 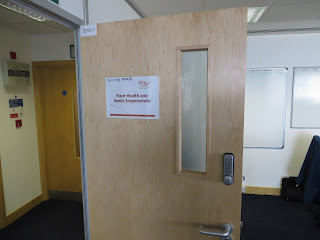 The FERA office was on the 10th Floor. I had envisioned a large facility with a waiting line to have my plants inspected. What I didn't realize is that the nurseries generally have the plants inspected for international mail order by visiting FERA inspectors. This was essentially a business office for FERA. So I was very lucky to find Mohan Pillai, PhD still in the office. Had I come half an hour later, he would have been gone to inspect plants off site. 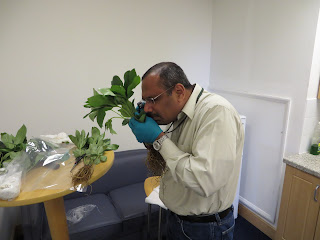 Mohan could not have been more helpful. I was pleased to learn that I had done a good job removing the soil from my Geat Dixter plants. Here, Mohan is using a loop to inspect a hellebore plant. 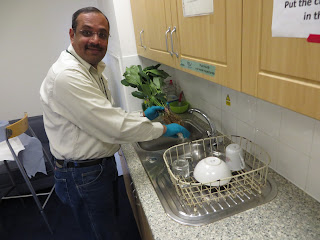 He re-washed the roots of each plant. 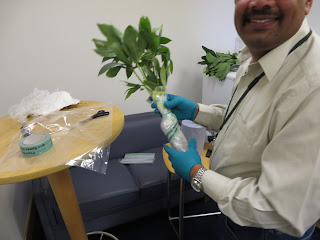 Each plant was wrapped in wet paper towel, placed in a plastic bag with the plant label visible, and sealed with an official FERA tape. 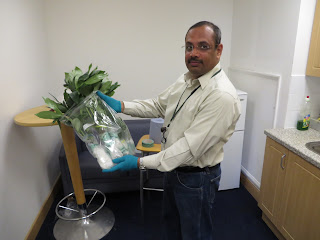 Next Mohan put all the plants in a large plastic bag for transport. 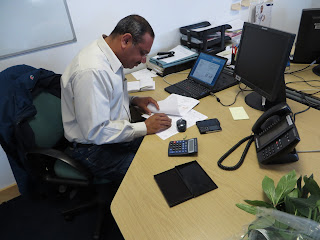 The deal was "sealed" when the certificate was stamped with the official FERA stamp. 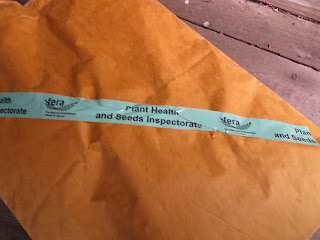 Mohan provided me with a large envelope to transport the plants more easily in the airport and eventually at US Customs, the last step, and the one that I was most concerned might not be successful. 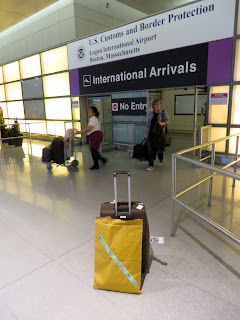 It took me over an hour to get through US Customs which I thought might be a bad omen, but when I declared my plants with all the FERA paperwork and my phytosanitary certificate carefully prepared by Mohan, I sailed through Customs. The official had never actually seen the paperwork done properly before! US Customs does not allow photography, so I took this shot of my plants when I exited at Logan Airport. 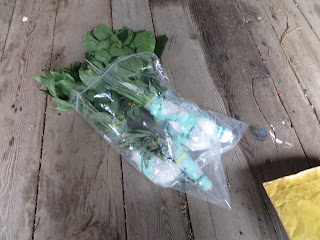 Saturday morning, May 25, I opened my envelope in the garage. 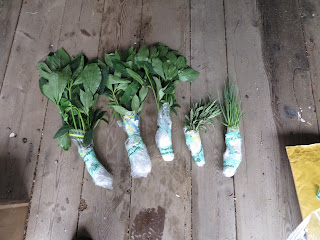 The plants, except for the Lysmachia which was slightly wilted, looked to be in good condition. 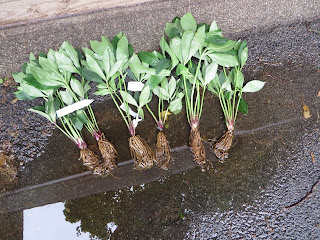 I decided to leave the plants in a puddle in the driveway for a few minutes to get rehydrated before I planted them. Luckily it was cool and raining-- a good day to plant! 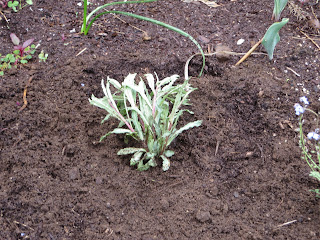 A Great Dixter plant, Lysmachia atropurpurea 'Beaujolais', in the ground in the Upper Garden 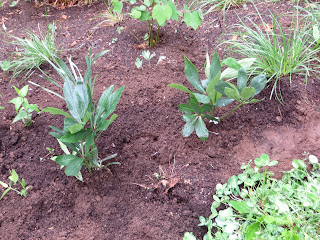 A pair of Hellebores called 'Ashwood Fascination' in the Woodland Garden 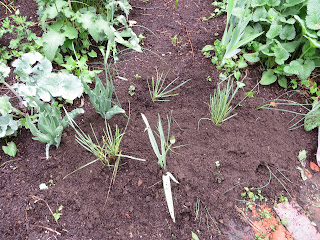 Seslaria nitida in the ground in the Lower Garden

A week later, I am optimistic that all the plants will survive. I will keep you posted.....