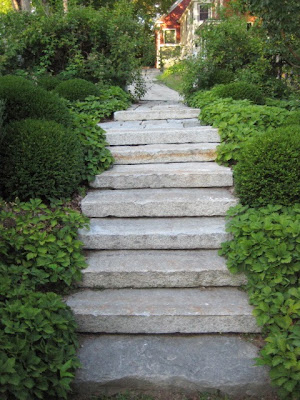 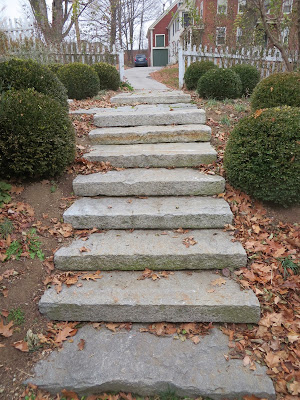 I was getting awfully proud of my planting of native Pachysandra procumbens (Allegheny spurge) in the Hall with Balls. I had gotten my original plants from Charles Cresson's Swarthmore garden over a decade ago. Year after year, I divided the plant until it created a carpet underplanting the boxwood rounds in the Hall with Balls. Just as the carpet had nearly filled in, it began to falter and gradually, then more rapidly, it disappeared. This summer it was entirely gone.

My post-mortem evaluation revealed vole activity, but more importantly, mushy roots. I knew this part of the garden was too sunny for Pachysandra procumbens but I thought as the enclosing yew hedges grew and the central Cornus officinalis matured, the garden would become progressively more shady making the Pachysandra procumbens increasingly more happy. My hypothesis is that the pachysandra had succumbed to Volutella blight, caused by the fungus Volutella pachysandricola, because it was stressed from being in too hot and dry of a situation. I will watching this part of the garden carefully because pachysandra may also be a host for boxwood blight and the Cylindrocladium pseudonaviculatum fungus. Apparently, plant species within the genera Buxus, Pachysandra and Sarcococca have been reported as hosts to this fungus.  Fortunately the boxwoods appear to be healthy so far.

I have replaced the pachysandra with Carex flacca 'Blue Zinger', a sedge from Europe and North Africa which has fine narrow glaucous leaves. The whispy texure of 'Blue Zinger' will contrast well against the dark green foliage of the boxwoods in the Hall with Balls and should form a clumping groundcover in about five years.