Borrowed and Stolen: No such thing as an Original Gardening Idea in Depot Park 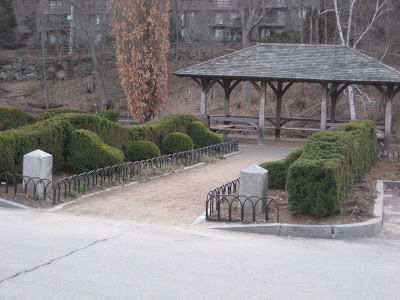 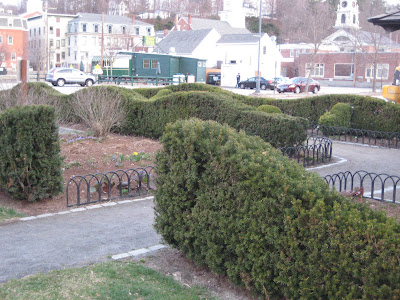 Undulating Hedges at the Pavilion Garden 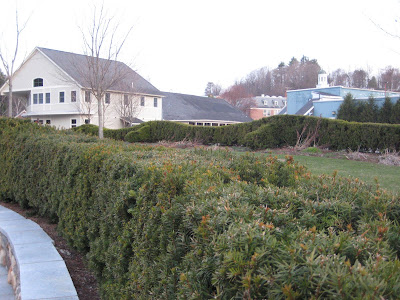 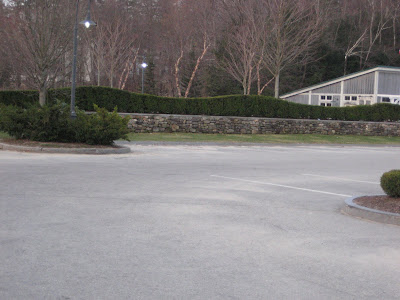 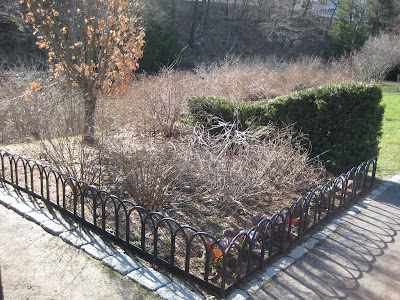 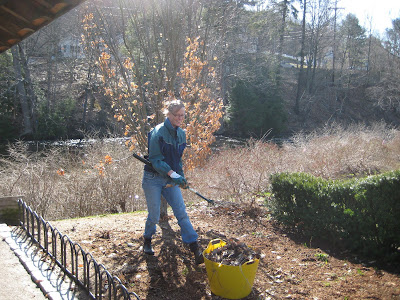 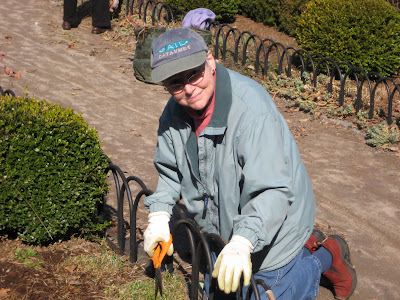 Molly working along the Hoop Fencing

I don't think I have done anything original in my gardens, public or private. I have stolen, or does it sound better borrowed, from many gardens that I have visited in person or read about. My gardens are an amalgamation of so many better gardens.
Usually the gardening volunteers meet on Wednesday mornings at 7 AM to work on the public gardens. However, this week the temperature was getting warm very quickly and we needed to clean up the borders before the minor bulbs emerged and were crushed by our gardening boots. So we gathered on Saturday morning for a few hours of clean up.

The borders at the Pavilion Garden at Depot Park (you can get a look at the garden during the growing season on the slide show on the sidebar) are enclosed by a low yew hedge and edged with a iron hoop fence. Depot Park was designed by Vermont garden designer and writer, Gordon Hayward www.haywardgardens.com/, in the late 1990's. At that time, there was no pavilion, just two rows of yew hedges forming an entrance to the park. Hayward also placed yew hedges at the other end of the park at the confluence of the Contoocook and Nubanusit Rivers.

When the yew hedges were young, a friend commented that they looked like soldiers marching in a long line. At first, I objected to the idea , but after some thought, I understood the criticism. I spent some time trying to think of a way to make the hedges more interesting and appealing and I came up with a solution while reading Paige Dickey's book Breaking Ground. Dickey had a chapter on Piet Oudolf's garden, Hummelo, in the Netherlands. In one now famous section, there is a series of rows of yew hedges that are clipped like waves. Each trough of a wave is aligned with crest of a wave behind it creating movement for the eye to follow. So we began shaping the waves in the hedges at Depot Park and after several years the effect was accomplished.

One of the main problems we encountered in the Pavilion Garden was that people and their dogs often walked into the plantings along the pathway. We needed to train them to keep on the path in an attractive but gently assertive way. In public plantings throughout Manhattan, there is low (about 12-18 inches tall) iron hoop fencing that protect the gardens. I wrote a grant and procured the funding for custom-made iron hoop fences at the entrance garden at the pavilion. They were a large expense, but should last many, many years with little care.

Another idea that I stole for Depot Park was planting Chionodoxa in mass under the shrubbery. The woodland garden at Wave Hill has masses and masses of Chionodoxa sardensis that have naturalized to create a bright bluish purple carpet in the woodland garden. So we did the same thing with Chionodoxa luciliae and have created an similarly spectacular effect for the spring garden.

Gardening, like all the arts, is built on a foundation of the past. If you have an understanding of gardening history, you can make informed decisions in your own garden. It is rare moment when there is a truly original shift in gardening design and I know that I will never come up with anything new in my gardens. What I can try to do is to learn from other gardens and use, but not copy verbatim, what I have learned. They say imitation is the sincerest form of flattery. I try to flatter the very best.